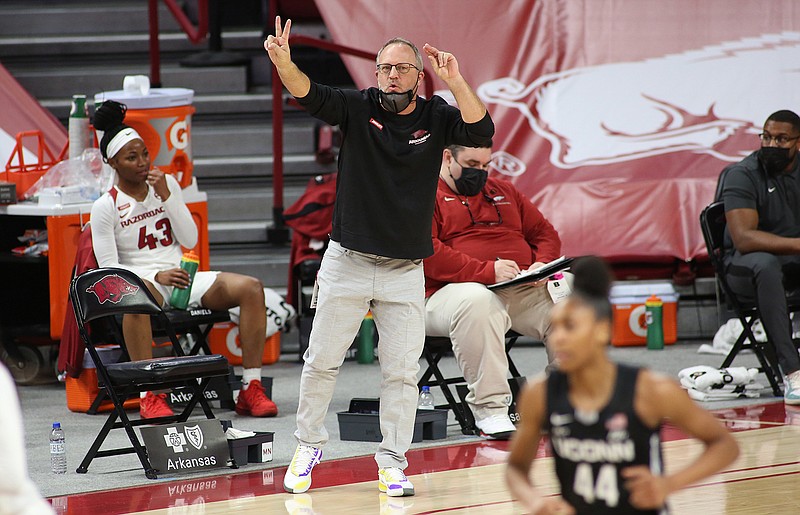 Arkansas women's head basketball coach Mike Neighbors gestures at his team during a Jan. 28 game against the Connecticut Huskies at Bud Walton Arena. The team faces off against Wright State today at 1 p.m. in the NCAA Division I Women's Basketball Tournament in Austin, Texas. - Photo by David Gottschalk of NWA Democrat-Gazette nwasptboyduawomen20210129

Spencer, 5-7, of St. Thomas Aquinas in Fort Lauderdale, Fla., helped the Raiders to the Class 6A state championship with a victory over Apopka Wekiva.

“Samara stepped in as our senior leader this year and had an incredible high school career, but specifically a great senior season on both ends of the floor," St. Thomas Aquinas coach Oliver Berens said. “She averaged nearly 17 points per game and was extremely efficient and stepped up for us in the biggest moments in the state and averaged 20.5 points per game. She had 24 in the state semifinal and 17 in the state championship.

“So not only is she a tremendous scorer for us but also had five steals in the state championship. She was just a great all-around leader, almost like an older sister for the rest of our girls.”

She made an unofficial visit to Fayetteville for the Colorado State football game on Sept. 14 that led to her commitment.

She was the lone senior on the court after another tore her ACL early in the season. Her leadership was key in St. Thomas Aquinas’ championship run.

“Samara was our only senior and basically only captain,” Berens said. “She was basically in a position where everyone was looking up to her as an example and she had to set the way for everyone else on the team. When times where tough and times were good she had to maintain her composure and carry the weight on her shoulders.”

Prior to coming to the Raiders for her sophomore year, Spencer helped Fort Meyers to a state championship as the sixth woman as a ninth grader. Berens sees Spencer as a good fit for Arkansas’ uptempo, three-point shooting offensive style of play.

“She scores the ball at a high rate and has a very high IQ,” Berens said. “She can score at all three levels. She can shoot the ball, she’s got a good in-between game and she gets to the rim and finishes, so I think her game translates really well on to the next level, especially to the up-and-down tempo that Arkansas plays.”

“Defensively, she rebounds the ball at a high rate,” he said. “She’s a good on-ball defender.”

Berens believes Spencer will need to add strength while getting used to the physicality of the game in the SEC, but there’s one area she is not lacking.

“I think in terms of the speed of the game, Sam plays at a really fast rate,” he said. “I’m think it’s going to translate really well early on.”

Ellis and Sage are rated 4-stars by Prospects Nation.