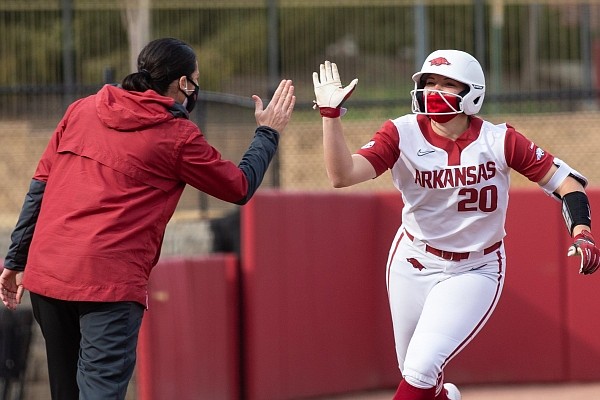 Arkansas left fielder Hannah Gammill (right) is congratulated by Coach Courtney Deifel after a home run during a recent game.

The University of Arkansas is on the cusp of its first Southeastern Conference regular-season softball championship, but the Razorbacks could also host postseason play.

Bogle Park was named as one of 20 potential sites to host a regional round of the NCAA Softball Tournament, the NCAA announced on Friday.

Arkansas coach Courtney Deifel said what the Razorbacks have done on the field has put them in position to possibly host a regional or even a super regional. They are currently ranked No. 7 in the latest ESPN.com/USA Softball national poll.

“I’m excited for this team to be in that conversation,” said Deifel, who is in her sixth season. “To play yourself into the position to host, it’s huge. It means you’ve put together a really full and special season. I guess we’ll have to wait a couple weeks to make sure it’s a for sure thing.

“We feel like it should be. We were anticipating this happening and so we’re just thrilled to see our name on that list.”

Due to the health and safety protocols surrounding the pandemic, the NCAA deemed it necessary to conduct NCAA championships at predetermined sites. Of the 20 selected sites, the committee will choose 16 to host regional round games. Eight of those 16 regional sites will be selected to host super regionals at the end of regional play.

Participating teams and the final 16 predetermined sites will be revealed during the selection show on May 16 at 8 p.m. on ESPN2.

The designation of predetermined sites will have no bearing on the teams selected to participate or for seeding in the 2021 Division I Softball Championship.

Regionals will take place May 21-23 followed by Super Regional on May 27-30 and the women’s College World Series June 3-9 in Oklahoma City.

The University of Louisiana, currently ranked 18th, is the only team ranked in the top 20 not listed as a possible host.

The Razorbacks served as a regional host in 2018 for the first time ever and advanced to the Super Regional in Norman, Okla., losing to Oklahoma in two games.

Based on recent guidelines, the NCAA will allow up to 50% fan capacity at these predetermined sites. Exact capacity percentages will vary by site, depending on state and local health mandates due to the pandemic.

That would mean fan capacity would be cut from what had been allowed the past couple of weekends in Bogle Park. Arkansas has allowed up to 85 percent capacity in the last couple of series.

Sunday’s Arkansas-Missouri game had an attendance of 1,358, which ranked ninth in the country this season. All three of those games ranked in the top 15, along with two games in the Arkansas-Alabama series.

Kevin Trainor, senior associate athletic director for public relations at Arkansas, said it’s encouraging to see fans return to the stands over the past few weeks.

“I think people are excited to be back at the ballpark and be able to cheer on their team,” Trainor said. “I know for sure we’ve learned how to adjust and make it an environment for our student-athletes and for our fans to be able to enjoy as well.

“While we might not be able to get as many fans as we’d like, we hope it sets a precedent that it will be a regular location for postseason play for years to come.”