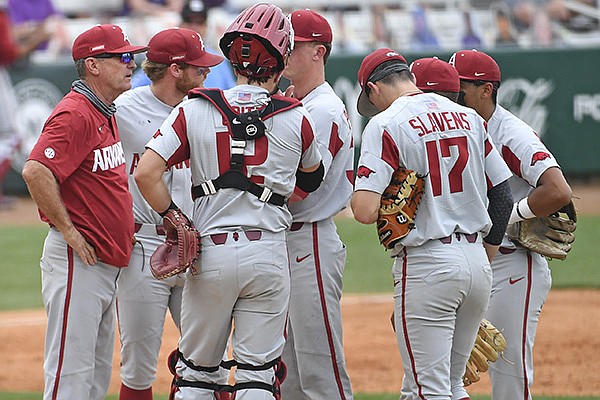 Arkansas head coach Dave Van Horn speaks with his infield against LSU, Saturday, May 1, 2021, at Alex Box Stadium on the campus of LSU in Baton Rouge, La. (Photo by Hillary Scheinuk/The Advocate)

Arkansas' comeback bid fell just short in the final game of a Saturday doubleheader at LSU.

The No. 1 Razorbacks scored three runs in the ninth inning, but stranded the tying run at first base and lost 5-4 to the Tigers in the nightcap at Alex Box Stadium. Arkansas won the first game of the day 17-10 to win the series.

The Razorbacks trailed 5-1 at the start of the ninth inning, but managed to load the bases with no outs against LSU closer Devin Fontenot. Robert Moore’s sacrifice fly cut the deficit to 5-2 and Jalen Battles hit a two-run single with two outs to pull Arkansas within 5-4.

Zack Gregory, who pinch hit for Braydon Webb earlier in the game, was struck out to end the game looking at a 1-2 pitch that appeared to be low and away.

Arkansas (34-8, 15-6 SEC) got off to a slow start against the Tigers. The Razorbacks had one run on three hits entering the ninth.

LSU (26-17, 7-14) scored all five of its runs in the first three innings against Lockhart and Vermillion. The Tigers led 5-0 when Brady Slavens tripled and scored on a sacrifice fly by Christian Franklin to give the Razorbacks their first run in the fourth inning.

Arkansas is scheduled to play again Friday against Georgia.

Devin Fontenot is in to pitch for LSU.

Wallace singles against Fontenot to start the inning.

Slavens works a 10-pitch walk and then Franklin follows with a single through the left side. The bases are loaded for Robert Moore.

Moore flies out to deep center. All three runners tag. The tying run is still batting in the form of Casey Opitz.

Opitz hits a line drive, but it's right at the third baseman. If Opitz hits that ball anywhere else this game is a lot closer.

Battles with a single up the middle, two runs score and Gregory, who is the go-ahead run, comes up for the Hogs.

Gregory strikes out looking on a pitch that quite frankly wasn't a strike.

Hogs take two of three from the Tigers, but lose the final game.

Kopps sets the Tigers down in order, adding another strikeout to his total, to end the eight inning.

LSU is making some very nice defensive plays this game.

After Zack Gregory pinch hits and grounds out the third baseman slides in foul territory and catches a foul ball on his back. Goodheart then hits a hot shot at the second baseman, who sticks his glove out and finds the ball to retire Goodheart.

Kopps shuts down LSU in the seventh with a strikeout, fly out to center and a strikeout looking.

Edwards gets the first two batters to fly out to the outfield. Opitz gets the Razorbacks first hit against Edwards with a single up the middle.

Battles hits it up the middle as well, but LSU had the shift and they get out of the inning.

Kevin Kopps comes in to pitch for Arkansas.

LSU gets a batter on third with one out, but a ground ball to Slavens is thrown home and Arkansas gets the out. Kopps gets the next batter to end the inning.

Arkansas goes in order for the third time in four innings as Edwards comes in and shuts Arkansas down.

Monke gets two strikeouts and shuts down the Tigers in order. He's settled down the hot hitting Tigers since he's came into the game.

Arkansas goes 1-2-3 in the fifth inning. Two first pitch groundouts and then a flyout to center end the inning.

Monke allows a two-out single, but that's it for LSU. That marks the first time the Tigers haven't scored in an inning.

Wallace flies out to right to start the inning.

Slaves drops down to a knee on a down and in pitch and he lifts it to deep right field that bounces off the wall and the right fielder. Slavens gets a triple.

Franklin follows with a fly ball to straight away center field and Slavens comes in to score to put the Hogs on the board.

Moore gets ahead in the count 3-1 and sits on the next pitch for a single to center.

Opitz lines out to end the inning.

Doughty leads off the inning with a single to right.

Vermillion gets a strikeout swinging for the first out.

Beloso singles through the right side, and Doughty goes from first to third.

Caden Monke is getting loose in the bullpen and he is going to come in.

LSU executes a safety squeeze, as Slavens' only play is to tag the batter out. LSU leads 5-0.

Monke gets a strikeout to end the inning, but the Tigers have put the leadoff batter on every inning and have scored that batter every inning.

Nesbit starts off the inning by grounding out to the third baseman.

Webb grounds out up the middle. The throw from the shortstop almost pulled Morgan off of first, but somehow he stayed on the bag and got Webb.

Goodheart grounds out to Morgan to end the inning. Morgan had to go into the hole and then dive to the bag to just get Goodheart.

Vermillion walks the leadoff batter to start the second.

He gets the next two batters to groundout and strikeout, but Crews singles up the middle to give the Tigers another run.

Slavens with an over the shoulder grab by the LSU bullpen to end the inning.

Arkansas gets two runners on with two outs via the walk, but they can't do anything with them as Battles strikes out looking to end the inning.

Slavens struck out swinging to begin the inning and Franklin grounded out up the middle on a really nice play by the shortstop.

LSU leads off the first with a single up the middle. Then after a fly out to left, the next batter is hit by a pitch.

Doughty then turns on an inside pitch and hits a homerun to give the Tigers the early lead.

Lockhart then walks the next batter and his day is done. Zebulon Vermillion coming on to pitch for Arkansas.

Vermillion gets the next to batters to fly out to right field and then left field to end the inning.

Matt Goodheart works a one-out walk, but then he's doubled up on a 1-6-3 double play. So nothing doing for Arkansas in the first, unlike the first game today when the Hogs scored five runs in the first inning.

Arkansas has lost seven consecutive series at LSU and is looking for its first series win in Baton Rouge since 2004. The Razorbacks have not won any of five series played at the new Alex Box Stadium, which opened in 2009.

LSU is led offensively by a pair of freshmen, right fielder Dylan Crews and first baseman Tre’ Morgan. Crews entered the series with a .362 batting average and 10 home runs. Morgan entered batting .358 and leads the Tigers with 12 doubles and three triples. The duo has combined for 39 extra-base hits and has been successful in 21 of 26 stolen-base attempts.

Crews and Morgan are among five position starters — three freshmen and two sophomores — who are playing their first SEC season for LSU.

LSU has the fourth-worst SEC record, but the Tigers entered the series having won five of their last nine SEC games. LSU nearly won a sixth game during that timeframe, but blew an eight-run lead in the eighth inning at Ole Miss last Sunday.