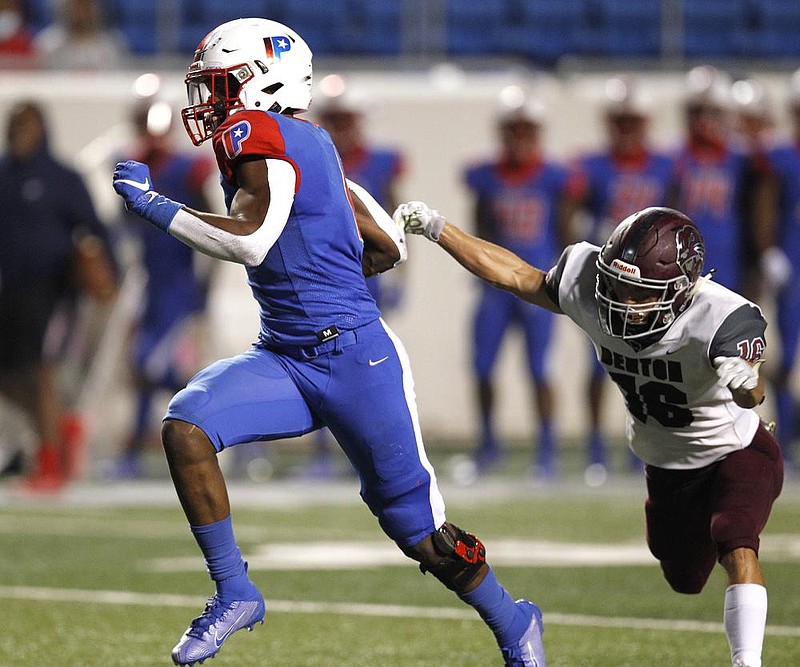 Little Rock Parkview will get spring football underway on Monday afternoon at War Memorial Stadium with some of the top talent in the state.

Those players will be looking to step in with a pair of Arkansas signees in quarterback Landon Rogers (6-4, 215) and tight end Erin Outley (6-4, 256) heading to Fayetteville.

“I'm really excited to be able to have spring football,” Little Rock Parkview head coach Brad Bolding said. “Our players have had a really good offseason. Very thankful life is becoming more normal. This is a really fun team to coach.”

Jointer rushed 162 times for 1,105 yards, 10 touchdowns and had 8 catches for 135 yards and a touchdown as a junior after missing most of his sophomore season because of an ACL injury.

“I’m beyond excited for my last season as a Patriot,” Jointer said. “I would say some things we need to accomplish in these spring practices are getting the guys who are now stepping up into starting positions used to the system and overall just turning our weaknesses into strengths as a team on both sides of the ball.

“Winning is my biggest goal. But personal goals I would say are just learning as much as I can from my coaches that’ll help me on the next level. I would love to have more rushing yards and be a even better team player.”

Bolding is excited about seeing a fully healthy Jointer piling up yards this upcoming season.

“James should be head and shoulders above where he was last season,” Bolding said. “I believe Razorback fans will enjoy coming to watch him play this fall."

Jointer committed to Arkansas on March 6 along with Maumelle offensive lineman Andrew Chamblee.

He has an official visit set up to Kansas State in June, but said he remains committed to Arkansas, where he plans to visit with fellow in-state commits likely on the Sept. 10-12 weekend when the Razorbacks host Texas.

“I have other schools wanting me to take one but I haven’t just locked in a date with them,” Jointer said. “But I have been talking to the other instate commits we all plan on taking our officials to Arkansas the same week during the season.”

Jointer explained his decision to take other visits while committed to Arkansas.

“You only get to be a recruit one time,” Jointer said. “Arkansas coaches call me more than one time a day. They recruit me hard as if they are still trying to get me to commit. So it’ll be hard for any school to change my mind about Arkansas.”

Jointer has been on of the more persistent recruiters for Arkansas and it is something that he plans to continue.

“This month and next will definitely be exciting for hog nation,” Jointer said. “We are in a good position to get the rest of the instate guys. I recruit them very hard as if I’m a coach and I think I’m going to get Isiah Sategna back home to the Hogs.”

White has not been offered by Arkansas, but has been by Ole Miss, Kansas State, SMU, North Carolina-Charlotte, Utah, Tulane, Arkansas State and other programs.

“(He’s) blowing up,” Bolding said. “I don’t think Arkansas is going to pull the trigger. Too many guys at that position.

“Just got off the phone with North Carolina, Clemson and LSU. I think there are some big-time offers coming real soon. North Carolina coach said he believes he’ll be one of the top 5 linebackers in the country by the time he is in college.”

White, who has a 38-inch vertical and a 315-pound power clean, had 59 tackles, 5 tackle for loss, 2 recovered fumbles, 2 interceptions, 8 pass breakups, a blocked punt and 2 rushing touchdowns last season as a safety and back-up quarterback.

“I’ve had several big schools say if he learns quick, he’ll start for us as a true freshman,” Bolding said. “Multiple college coaches say he has first-round draft pick potential as a hybrid linebacker.”

McKenzie is a guard for Parkview who has offers from Memphis and Arkansas State.

“He plays guard, but everyone is recruiting him as a center,” Bolding said.