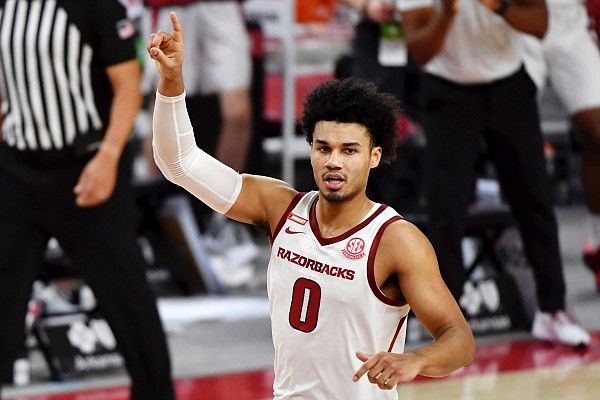 Arkansas forward Justin Smith (0) reacts after scoring against Auburn during the second half of a game on Wednesday, Jan. 20, 2021, in Fayetteville. (AP Photo/Michael Woods)

Smith, the graduate transfer from Indiana who solidified the Razorbacks’ frontcourt and played a pivotal role in Arkansas’ run to the Elite Eight in the NCAA Tournament in 2021, made the announcement in a post to his Twitter account.

He is the second Arkansas player to enter his name into this year’s draft. Moses Moody, the SEC freshman of the year in 2020-21, declared on April 9.

“This year was full of challenges for all of us, but I am proud that our team was able to overcome and find so much success,” Smith wrote. “History was made, and this team will never be forgotten.

“To Coach Muss and the rest of the staff, thank you for pushing me to be a better player each and every day. To my teammates thank you for believing in me and fighting alongside me game in and game out.

“It has been a lifelong dream of mine to play professional basketball and after talking to my family and the coaching staff, I have decided to forego my extra year of eligibility. I will begin my professional career by hiring an agent and entering the 2021 NBA Draft.”

Smith finished last season second on the team in scoring at 13.6 points per game, and he led the Razorbacks in rebounding at 7.3 per outing. Both figures were good for career highs.

He grabbed a team-high 92 offensive rebounds, and Moody was second with 64.

Smith improved his play as the season wore on. After surgery on his right ankle forced him to miss four games in January, he averaged 13.8 points and 8 rebounds over six games in February, and 17.4 points and 8.1 rebounds in Arkansas’ eight games in March.

He shot 60% from the floor in both months.

During the team’s NCAA Tournament run, Smith recorded a pair of double-doubles, adding 27 points and 12 rebounds against Colgate in the first round, and 12 points and 14 rebounds — 11 offensive — against Oral Roberts in the Sweet 16.

Smith grabbed 21 offensive rebounds in the Razorbacks’ two games against the Golden Eagles.

“Thanks for trusting and believing in Arkansas!” Razorbacks coach Eric Musselman tweeted. “What an incredible season both for you individually and as a team. Can’t wait to watch and follow you at the next level!”

In addition to his ability to score and rebound at a high rate, Smith was one of Arkansas’ best passers. After averaging 0.8 and 0.9 assists per game in his final two seasons at Indiana, Smith added a career-high 1.8 in his lone season with the Razorbacks.

Smith finished with 16 multi-assist games last season, 13 after returning from injury. He had a career-high four assists in a loss at Oklahoma State on Jan. 30 then matched that total Feb. 16 in a home win over Florida.

Arkansas graduate-transfer guard Jalen Tate announced April 18 that he will not return to school and instead begin his professional career.