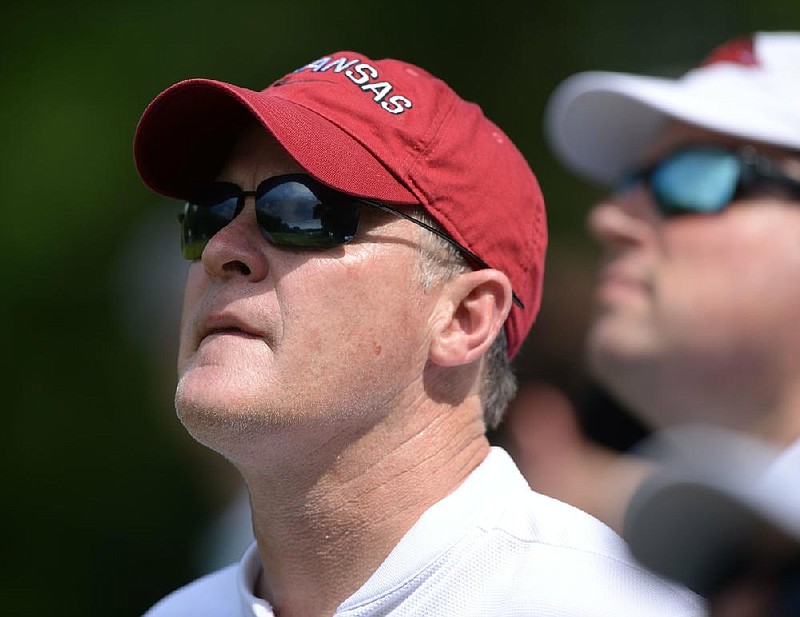 NWA Democrat-Gazette/ANDY SHUPE Hunter Yurachek, director of athletics at Arkansas, watches Saturday, May 25, 2019, as Julian Perico of Arkansas tees off on the 14th tee box during the second day of play in the Men's NCAA Golf Championships at Blessings Golf Club in Johnson. Visit nwadg.com/photos to see more photographs from the day's rounds.

Apparently it has nothing to do with the spring ritual of attending Razorback clubs all over the state.

University of Arkansas Athletic Director Hunter Yurachek, football Coach Sam Pittman and Tusk V will do a four-day roadshow meeting with fans, in this order: Harrison (May 17), Dumas (May 18), Hot Springs (May 19) and Little Rock (May 20).

The doors will open 30 minutes early.

Tusk, he’ll be the one in the cage, will also be making appearances in Russellville, Jasper, Sheridan, Pine Bluff, Mount Ida, Hot Springs Village, Morrilton and Conway.

This is not Yurachek’s first road show, nor will it be his last.

Not long after he arrived from Houston, he admitted in a small meeting that he had never been to Arkansas before, but quickly added, it won’t seem like it.

That spring, he and Chancellor Joe Steinmetz made a few similar stops around the state.

Yurachek did a virtual tour last year during the pandemic.

His quest to know the state and Razorbacks fans is reminiscent of when Frank Broyles came to Arkansas as the head football coach.

Broyles learned about our great state, and he got how people think.

There was a decade of disconnect under the previous athletic director, who added several layers of administrators between himself and the fans.

Perhaps Jeff Long was simply introverted, or not.

Regardless, Yurachek is a people person who blends with the rich and famous as easily as those who consider season tickets a blessing.

He understands the importance of the fans and their passion for all things Razorback.

Obviously last season, with restricted attendance across the country, every college athletic program was hit financially.

The hope is to return to full attendance this fall and get back on track.

One thing that obviously helps lift restrictions and have 75,000 fans in Reynolds Razorback Stadium would be vaccinations against covid-19.

It would be hard, but the UA could have the first fully-vaccinated fan base in the country, and that would be something to brag about.

Of course, pushing the critically-needed vaccinations is not part of Yurachek’s spring fling.

His agenda is 100% Razorback oriented.

For more information or to make a reservation, which is needed, go to arkansasrazorbacks.com and scroll down to On the Road Again: Razorback Roadshows Set for May. Click on it and you will find all the information including links for reservations for each of the meetings.

Almost as soon as it became become knowledge that David Patrick, assistant basketball coach and associate head coach, was leaving Arkansas for Oklahoma, emails began to come in.

Patrick was the third Razorback assistant in two years to leave, so it was asked is Eric Musselman difficult to work for?

I don’t know, I have never worked for him.

However, assistant coaches coming and going is a nationwide trend that usually happen when a team has success.

For a very, very long time, assistant basketball coaches at Arkansas were not in demand, and so they stayed.

Most head coaches, though, are accustomed to coaches coming and going.

In the case of Patrick, it shouldn’t have surprised anyone he would join new Oklahoma Coach Porter Moser’s staff because they have a history.

They were on staff at UALR together and became close friends who have remained in touch with each other all these years.

Besides, Musselman knows the ropes and he doesn’t seem to have trouble finding good replacements.