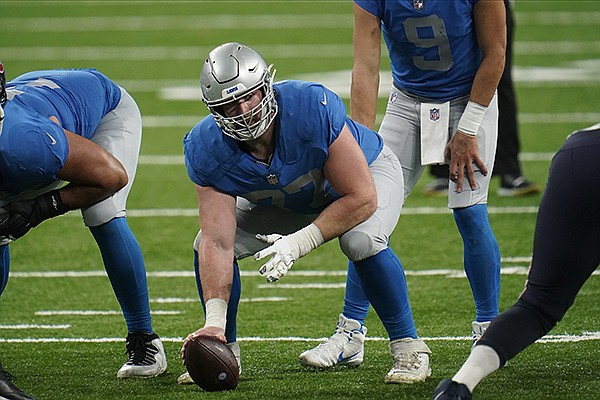 Detroit Lions center Frank Ragnow (77) plays against the Houston Texans during the second half of an NFL football game, Thursday, Nov. 26, 2020, in Detroit. (AP Photo/Paul Sancya)

DETROIT — The Detroit Lions are serious about building one of the NFL's best offensive lines — and keeping it together for years to come.

The Lions agreed to a four-year contract extension with center Frank Ragnow on Thursday that should keep him in Detroit through the 2026 NFL season.

NFL Network reported the deal is worth $13.5 million per season, which makes Ragnow the highest-paid center in the NFL, and includes $42 million in guarantees.

The Lions took Oregon offensive tackle Penei Sewell with the seventh pick of last week's draft, when general manager Brad Holmes told the Free Press he wanted to build a "beast" up front.

Sewell, 20, is considered one of the top offensive line prospects to come out of college in recent years, and will join Ragnow, left tackle Taylor Decker and left guard Jonah Jackson on the line for the foreseeable future.

Decker, who turns 28 in August, starts the four-year, $60 million extension he signed last summer, this season. Jackson, 24, is entering Year 2 of his rookie contract. And the Lions can control Sewell's rights for five years, including the rookie option.

Ragnow, who turns 25 later this month, is under contract this fall for $2.086 million, and the Lions exercised the fifth-year option on his contract last week for a guaranteed $12.657 million, putting the total value of his deal at about $69 million.

Corey Linsley, who edged Ragnow for All-Pro honors, signed the previous top deal for a center, a five-year, $62.5 million contract, as a free agent in March.

The Lions' first-round pick in 2018, Ragnow has been a steadying force at center since his rookie season.

He missed one snap as a rookie for an equipment malfunction and started 29 of a possible 32 games the past two seasons. In 2020, Ragnow missed two games with fractured cartilage in his throat.

Holmes, in his first season as Lions GM, said last week that signing Ragnow to a long-term extension was "extremely important," but he declined to put a timetable on when that deal would be done.

"We already view him as a long-term piece and he is a foundational piece because Frank is a guy that plays the game the right way," Holmes said. "He's everything that we look for in what we want as a Lion."