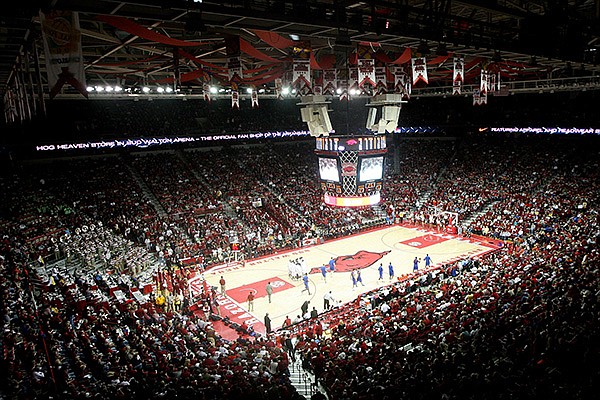 Bud Walton Arena is shown in this file photo.

During a question-and-answer session at a Fayetteville Chamber of Commerce luncheon, Yurachek said he and his staff are in the early stages of re-examining a feasibility study for the arena.

“We started to conduct a feasibility study for Bud Walton Arena that was almost to its completion point in December of ’19, January of ’20, and this thing called covid hit,” Yurachek said. “That really got put on the back burner. We’re starting to dust that off.

“Bud Walton Arena is 27 years old now. It’s lacking in fan amenities that exist in most venues now. We’d love to have a dynamic club level like we have at our football stadium and some different club areas. We need to renovate our suites and just create some different premium areas to enhance our fan experience.”

“That’s probably a three- to five-year timeline before anything like that happens, unless somebody has $100 million they want to donate to me today,” Yurachek said.

“We’ve got to conduct a feasibility study, not just on the building itself, but on what this market will bear.”

A renovation to the arena was first mentioned in 2011 when former Arkansas athletics director Jeff Long outlined a master plan for the Razorbacks’ facilities. At the time, Long mentioned possible changes to the arena that could make it more attractive for non-sporting events, such as concerts.

The arena was built for $32 million in 1993. In addition to Arkansas’ men’s and women’s basketball games, it hosts the Wal-Mart Shareholders Meeting and university and high school graduations each spring.