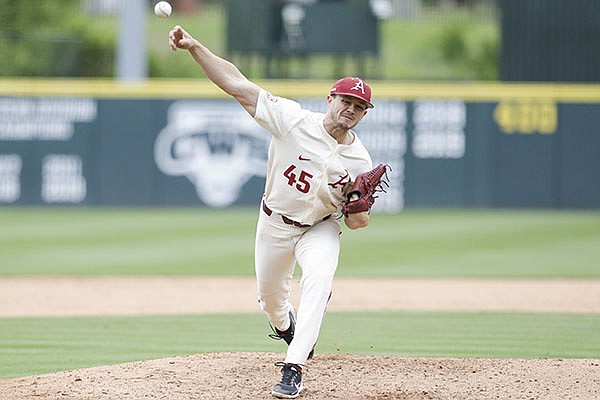 Arkansas pitcher Kevin Kopps throws during a game against Georgia on Sunday, May 9, 2021, in Fayetteville.

FAYETTEVILLE — When is the right time to bring in a closer?

For No. 1 Arkansas and its ace reliever Kevin Kopps, the right time has been whenever the game is on the line.

That was the case Sunday when Kopps pitched the final 4 1/3 innings as the Razorbacks rallied for a 5-3 victory over Georgia at Baum-Walker Stadium. The Razorbacks won the series after the teams split their first two games.

Arkansas (36-9, 17-7 SEC) remained the only SEC team without a series loss this season. The Razorbacks also kept pace with Tennessee atop the SEC standings entering a series against the No. 6 Volunteers next week in Knoxville, Tenn.

Kopps kept pace with Vanderbilt starter Kumar Rocker in the fascinating race for SEC pitcher of the year. Kopps’ numbers include 7 wins, 7 saves and 83 strikeouts to 13 walks in 49 2/3 innings.

Kopps worked around 3 hits and struck out 5 in his 57-pitch outing Sunday. He lowered his nation-leading ERA to 0.72, and lowered his SEC-only ERA to 0.45 in 14 appearances that have spanned 40 innings.

"He's got one of the best breaking balls in college baseball,” Georgia coach Scott Stricklin said on his postgame radio show. “You can see why he's successful. He can throw it any time — 88 mph hard breaking ball, which is really hard to hit when you know it's coming.

“We knew what he was going to do and that's the amazing thing — our hitters know what's coming and they still can't hit it. That's how good that guy is."

Kopps pitched 2 1/3 innings before the Razorbacks took the lead on Jalen Battles’ solo home run to lead off the seventh inning. Matt Goodheart tied the game 3-3 with a two-out solo home run in the sixth.

Georgia (28-18, 11-13) never seriously threatened against Kopps. The Bulldogs put two aboard with a leadoff and one-out single in the eighth inning, but Kopps struck out Riley King and Chaney Rogers to strand them, then retired all three batters he faced in the ninth.

“I don’t know what else to say about him,” Arkansas coach Dave Van Horn said. “He’s just a competitor. He wanted the ball.”

Kopps said he felt better as the outing went on. He was more efficient than Friday when he labored through a 54 pitches in a 3-inning save that included 5 base runners on 3 hits, 1 walk and 1 error behind him.

Prior to the Georgia series, Kopps had not been as sharp in his second weekend outing.

"My pitches were definitely better than the other night,” Kopps said. “The other night felt a little bit off. I was just able to throw more for strikes and locate a little better today."

Kopps’ dominant season has included a variety of different outings, from four innings wrapped around an hour-plus rain delay at Mississippi State, to three appearances in as many days against Auburn.

Sunday’s outing was also unique. Not only were the 13 outs a season high, but Kopps entered with the Razorbacks trailing Georgia 3-0 in the top of the fifth inning.

That’s not exactly the time for a closer, but as Van Horn pointed out, Kopps is not a traditional closer. He is more of a “finisher,” Van Horn said, who could start if he wasn’t so valuable out of the bullpen.

“We kind of knew that he had some pitches left in him,” Van Horn said. “We didn’t have to throw him yesterday and (knew) that we probably could get 60 or 70 out of him today. He had pretty good stuff. They guessed early on him and had a couple of hits. He left a couple of pitches up and they got on them, but for the most part he did a tremendous job.”

Kopps might have provided a lift to a sputtering Arkansas lineup. The Razorbacks had two hits in the four innings before Kopps came into the game, but strung together a four-hit bottom of the fifth that pulled them within 3-2.

Arkansas was advantageous against tiring Georgia starter Ryan Webb, who had little help behind him because the Bulldogs used their top relievers to close Saturday’s victory that tied the series.

But Kopps’ presence has energized the Razorbacks’ hitters in the past, as Arkansas pitching coach Matt Hobbs detailed earlier this season.

"I think our team has started to feel that when he comes on the mound, that we feel really good about how this is going to go because he's going to be incredibly competitive with multiple pitches inside the strike zone," Hobbs said last month.

Van Horn said the energy changed some in the dugout after Kopps retired Georgia clean-up hitter Connor Tate to end the top of the fifth inning and strand a runner at first base. Tate hit a two-run single with two outs in his previous at-bat in the third inning.

“There was probably a little bit different feeling,” Van Horn said, “like we’ve probably got a couple innings here where they’re not going to score, we’ve got to catch up.”