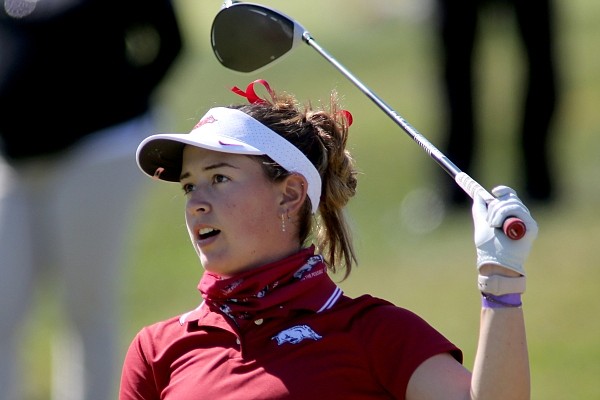 Kajal Mistry got on a roll and Cory Lopez eagled her final hole Tuesday to help the No. 17 University of Arkansas women’s golf team shoot a 6 under and move up six spots to second place after the second round of the NCAA Louisville Regional.

Mistry, a sophomore from South Africa, shot a 5-under 67 at the University of Louisville Golf Club in Simpsonville, Ky., to move to even par for the tournament and tie for 14th place.

The Razorbacks carded a team score of 281, an 18-stroke improvement over Monday’s opening round. Arkansas is tied with No. 1 South Carolina at 5 under, four shots behind No. 8 Florida State.

The top six teams from Louisville and three other regionals will advance to the NCAA Championships after the final round today.

“We played a great round of golf today collectively as a team,” Coach Shauna Taylor said in a UA news release. “All five of our players were in a great position to score all day. It was a true team effort. It was so great to see Kajal reap the benefits of her hard work today.

“Her 5 under was much deserved. We have talked about the idea of you don’t have to be perfect to be awesome and golf is a game that requires presence and patience. Our group did just that today and we look forward to the opportunity tomorrow. I believe in this group and know that they are prepared to keep climbing the leaderboard.”

Mistry birdied her final three holes on Nos. 7-9 and had six birdies on the day vs. one bogey.

The freshman Lopez backed up her opening-round 71 with another 1 under, highlighted by the eagle on the 503-yard, par-5 ninth on which she hit a hybrid from 208 yards out and made a 40-foot putt. The Monterrey, Mexico, native is tied for eighth place with South Carolina’s Ana Pelaez.

North Florida’s Christin Eisenbeiss shot a 5-under 67 to take a one-shot lead over South Carolina’s Mathilde Claisse heading into the final round. Lopez and Claisse own two of the five eagles posted through two rounds.

Mistry, Eisenbeiss and UCLA’s Emma Spitz, who is tied for third place at 4 under, are the only players among the field of 98 to manage a 67 at the regional.

Starting on the back nine again, the Razorbacks posted nine birdies against four bogeys in the first half of their round, a sharp contrast to playing that part of the course in 11 over Monday.

Junior Brooke Matthews birdied Nos. 10, 12 and 17 and was still at 3 under before a triple bogey on the par-4 sixth stunted her round. The Rogers native finished the day with a birdie on No. 9 to shoot a 72 and remain at 5 over and tied for 38th for the tournament.

Sophomore Ela Anacona of Buenos Aires, Argentina, had a steady day with one birdie and one bogey to remain at 2 over and in a tie for 20th.

Arkansas sophomore Julia Gregg of Farmer’s Branch, Texas, opened the day with back-to-back bogeys, but she got both strokes back in with birdies on Nos. 12 and 14 before finishing a round of 73 to go to 9 over.

The day’s biggest faller was No. 9 Auburn, which posted 8 over for the second consecutive day and dropped six spots to 12th, eight shots back of the cut line. Both UCLA and Tennessee (+17) fell five spots.