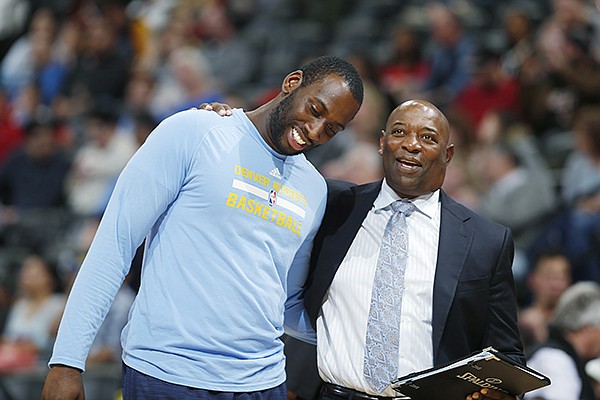 FAYETTEVILLE — Who could have guessed the 1995-96 Florida Beachdogs would produce two NBA head coaches?

Eric Musselman was coach of the Beachdogs — a CBA team in West Palm Beach, Fla. — that season, and Keith Smart was one of his players.

Now Musselman and Smart are back together at the University of Arkansas.

Musselman, who has a 45-17 record in two seasons as the Razorbacks coach, announced Wednesday he has hired Smart as an assistant coach.

Previously, Musselman and Smart were head coaches in the NBA for both the Golden State Warriors and Sacramento Kings. Smart also was head coach of the Cleveland Cavaliers — as was Bill Musselman, Eric’s father.

Eric Musselman and Smart worked together with the Warriors during the 2003-04 season when Musselman was the head coach and Smart was an assistant.

Arkansas is the first college job for Smart, 56, but he has 22 years of professional coaching experience, including 19 in the NBA. His most recent job prior to being hired at Arkansas was as a New York Knicks assistant coach during the 2018-19 season.

“What an incredible opportunity for our players to be mentored and coached by Coach Smart,” Musselman said in a news release. “His coaching experience is unmatched, being a three-time NBA head coach.”

Smart is probably best known for hitting the game-winning shot for Indiana when the Hoosiers beat Syracuse 74-73 in the 1987 NCAA Tournament championship game in New Orleans.

A junior guard, Smart hit an 18-foot baseline jumper with four seconds left and finished with 21 points. He was voted by the media as the Final Four’s most outstanding player.

A second-round draft pick by Golden State in 1988, Smart played two games in the NBA with the San Antonio Spurs, then had a nine-year playing career overseas and in the CBA.

“His playing experience includes him hitting one of the most clutch shots in the history of college basketball and playing at the highest level professionally,” Musselman said. “Keith is someone I coached and thought so much of his knowledge of the game I hired him at Golden State.

“We are getting an incredible coach. He knows how to develop talent and is an excellent X-and-O coach. Our players are going to love Coach Smart.”

Smart is filling the last opening on Musselman’s staff and replacing David Patrick, who resigned at Arkansas after one season to become an assistant coach at Oklahoma.

Musselman’s assistants are now Smart, Argenal and Clay Moser, who has been with Musselman since his first season at Arkansas. Moser also had worked previously with Musselman in the NBA and CBA.

Musselman and Smart first were together during the 1989-90 season with the CBA’s Rapid City Thrillers. Musselman was in his first season as a coach and Smart played for him.

“ I am excited to be reunited with Coach Musselman, a person I’ve known for over 30 years, and to continue my growth as a basketball coach,” Smart said in a news release. “I cannot think of a better place than with Coach Musselman and at the University of Arkansas.”

Smart, who signed with Indiana after playing at Garden City (Kan.) Community College, said he also was recruited by Arkansas Coach Nolan Richardson.

“By becoming a Razorback, my basketball life is somewhat coming full circle as Coach Richardson recruited me,” Smart said. “In addition to playing for and working with Coach Muss, I have kept in close contact with him over the years, sharing ideas and strategies. I know what he is teaching, and I know his expectations.”

Smart finished his playing career with the Fort Wayne Fury during the 1996-97 season, then the next three seasons was the team’s coach. He began his NBA coaching career for the 2000-01 season as an assistant with the Cavaliers.