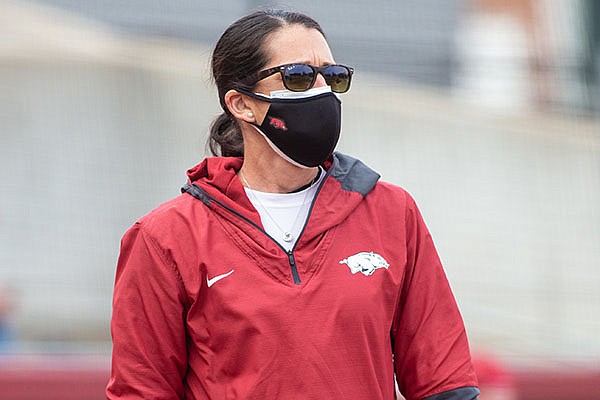 The University of Arkansas softball team is trying a little exercise for the eyes this season, and it’s helped the vision of a championship come into focus.

The No. 6 Razorbacks utilized vision training with a local optometrist that’s translated to greater success on the field. Arkansas has become one of the top power-hitting teams in the country and increased its walk rate over the past couple of seasons.

Coach Courtney Deifel is a believer in the training.

“I think it’s helped a ton,” she said. “Our hitters like it. It helps with pitch recognition, reaction time and picking things up. I think it’s been huge.”

No. 2 seed Arkansas earned a share of the SEC title and open play in the SEC Tournament around 4:05 p.m. Central today against seventh-seeded Tennessee in the quarterfinals at Rhoads Stadium in Tuscaloosa, Ala. The Lady Vols edged Texas A&M 3-2 in 9 innings on Wednesday.

Dr. Cliff Hughes, a Fayetteville optometrist who has been working with the team, said vision is much more than what someone can read off an eye chart, especially when it comes to athletes.

“You’re talking about peripheral awareness, hand-eye coordination, depth perception, processing speed,” Hughes said. “Depending on how you break it down, there’s about 10 or 12 different skills. What I tell athletes is … if I can get you seeing more quickly than you’re currently seeing and more accurately where you can make faster decisions, I can make you a better athlete on the field.

“What’s kinda paved the way for this is the digital revolution. With all the digital technology out there, we can now quantify these things. If we can quantify it, we can improve it. It’s really neuro training is what it is. This level of vision happens in the brain.”

It’s a similar story for drawing walks. Arkansas is averaging 3.98 walks per game this season compared to 3.44 a year ago. That number was 2.79 per game two seasons ago.

The Razorbacks are ranked third in the nation in home runs per game and fourth in total walks drawn.

Catcher Kayla Green was the first Razorback to try the training after suffering multiple concussions. After she showed great improvement, Deifel and the coaching staff decided to get more players involved.

“We used her kind of as a guinea pig last year because she had so much room for growth,” Deifel said. “She felt a huge difference.”

Green said it’s helped her both at the plate and behind it. Her batting average went from .214 in 55 games in 2019 to .375 in 23 games last season. She’s hitting just .239 this season, but her 12 home runs match the total of her last three seasons combined.

The training helps to calm the eyes and allows them to focus, Green said.

“It’s allowing our eyes and body to work faster together,” Green said. “My biggest problem was just trusting my eyes and trusting myself.

“It’s helped me a lot catching, too. After the concussions, I was having trouble with my peripheral vision on my left side. I was missing a lot of balls on that side. Vision training has helped me expand that, and I don’t miss nearly as many on that side any more.”

Hughes is using some of the same techniques utilized in a recent study that involved Duke and Indiana college baseball players. The study showed hitters who utilized the training produced an increased launch angle and more distance on batted balls, Hughes said.

Hughes said the buy-in from the Razorbacks has been outstanding.

“It’s way better than I could have dreamed of,” he said. “They could just go through the motions. They have to take the principles and take it on to the field. That takes buy-in and want-to. They are taking it, utilizing it and reaping the benefits from it.

“A lot of other athletes, you have to convince them this is important. Baseball and softball players, they’re already convinced. They are the ones coming in here with 20/15 vision saying, ‘Can you make me better?’ To some degree, yes we can.”