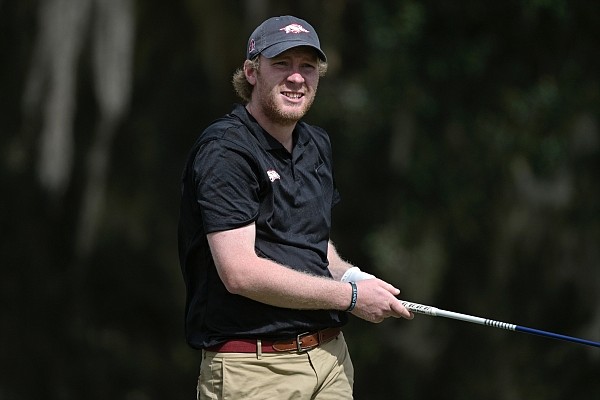 The No. 24 University of Arkansas men’s golf team found its scoring groove Tuesday, firing a 4-under 280 to move up to third place at the NCAA Kingston Springs (Tenn.) Regional with one round to go.

Senior William Buhl had an active day, with six birdies and four bogeys en route to a second consecutive 2-under 69 that left him in a tie for third place on the par-71, 7,107-yard layout at The Golf Club of Tennessee.

San Diego State turned in the day’s best round, an 8 under that helped the Aztecs surge into the lead at 11 under, two strokes ahead of No. 13 Vanderbilt, which carded a 4 under Tuesday. The Razorbacks are at 5 under, four strokes back of the Commodores.

“It was a solid day for all five players,” Arkansas Coach Brad McMakin said in a news release. “We played the round we needed in order to get back in position for [Wednesday]. We have a great opportunity tomorrow to advance.”

No. 10 North Carolina State is in fourth place with a team score of 3 under, while top seed and No. 3 Clemson is tied with UNC-Charlotte at 2 under in a tie for fifth.

The top five teams advance to the NCAA Championships in two weeks, along with the top individual from a non-advancing team.

Buhl, a senior from Fairhope, Ala., leads the field with 12 birdies, one more than Michigan State’s James Piot. After opening his round on No. 10 with a bogey, Buhl made birdies on 11, 13, 15 and 17 to hit the turn at 5 under for the tournament. Another birdie on the par-4 second hole pushed him into sole possession of second place for a time. He wound up with one more birdie and three bogeys the rest of the round.

San Diego State’s Youssef Guezzale fired a 68 on Tuesday to claim a share of the 36-hole lead with Vanderbilt’s Reid Davenport at 5 under. Buhl is in a four-way tie for third along with San Diego State’s Puwit Anupansuebsai, Virginia’s Pietro Bovari and Loyola Maryland’s Evan Brown.

Arkansas junior Julian Perico, fueled by a stretch of four birdies in five holes to open the front nine, shot a 70 on Tuesday to reach 1 under for the tournament and a tie for 14th place. He’s tied with Arkansas senior Tyson Reeder, who was 4 over after 11 holes but made birdies on Nos. 2, 4 and 5 down the stretch to wrap up a round of 72, which was the Razorbacks’ nonscoring round.

Freshman Manuel Lozada shot a 70 with three birdies and two bogeys to improve 12 spots to a tie for 35th.

Junior Segundo Oliva Pinto, the SEC medalist two weeks ago, bounced back from a rough opening day to contribute to the scoring with a 71 on Tuesday. Pinto had three birdies and three bogeys.