What to expect from Texas A&M transfer Jaxson Robinson 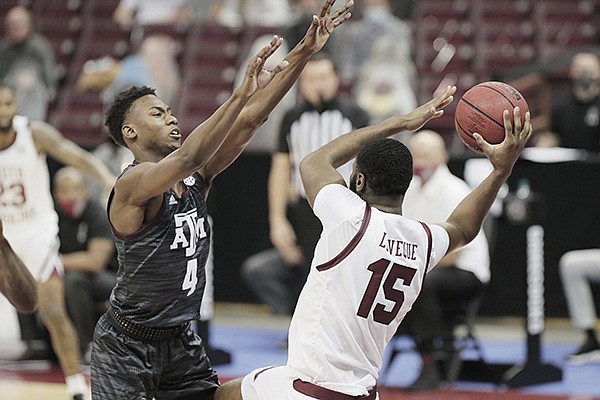 Arkansas and Eric Musselman brought on board last week another intriguing player who has a chance to be a key piece to the Razorbacks’ success in 2021-22.

Former Texas A&M guard Jaxson Robinson (6-7, 195) signed with Arkansas after entering the NCAA transfer portal this spring, becoming the fourth roster addition for the Razorbacks since their run to the Elite Eight of the NCAA Tournament. He joins Miami point guard Chris Lykes and wings Au’Diese Toney of Pittsburgh and Stanley Umude of South Dakota.

In a statement announcing Robinson’s signing, Musselman pointed to the young guard’s upside and potential, and his ability to knock down shots from the perimeter. He added that Robinson will fit in well with the team’s other incoming players and those returning.

Robinson’s numbers in his lone season with the Aggies do not jump off the page. He averaged 2.1 points and 1.1 rebounds over roughly 9 minutes per game, and shot 8 of 28 (28.6%) from three-point range in 14 outings. However, it isn’t entirely fair to judge who he is as a player after last season.

It was well documented that Texas A&M’s program was bitten by covid-19 as much or more than any team in college basketball that initially set out to play a full schedule. The Aggies did not play a single game in February, the heart of the conference season. In all, 10 games were canceled and nine were related to the virus.

That stretch wiped away what likely would have been crucial on-court experience against solid competition and development opportunities from Robinson, one of the youngest players in college basketball last season, according to Texas A&M coach Buzz Williams.

The Aggies played only 18 games, and the freshman saw time in 14. He earned a start in four, three in SEC play and one at Kansas State in the Big 12/SEC Challenge. When Williams gave Robinson extended run, he proved he could bring value to the floor.

Per 40 minutes against SEC teams, Robinson averaged 11 points and 4.9 rebounds, according to Sports Reference.

And during a three-game stretch at LSU, vs. Auburn and at South Carolina to begin conference play, Robinson averaged 18 minutes per game and made decent scoring contributions. He put up 5.6 points in that span and knocked down 5 of 15 three-point attempts, including 4 of 10 in the final two games.

Defensively, he was a plus as well. According to HoopLens analytics, Texas A&M allowed 0.84 points per possession over 68 possessions in those games with Robinson in the lineup and forced a turnover on 22.1% of opponents’ offensive trips.

Robinson also put his length and athleticism to good use against an LSU team known for being rugged on the offensive glass, bringing in seven rebounds — five on the defensive end. Prior to that outing, he grabbed one total rebound in four appearances in nonconference play.

“His demeanor, his spirit, he’s a beautiful human being,” Williams said after the Aggies’ win at Auburn on Jan. 2. “He’s starting to figure out how hard you have to play. He’s starting to figure out how hard it is to be successful at this level. I thought this was his best week against the best two (teams) we’ve had through eight games, and he earned the right to start. It wasn’t given to him.

Williams also noted Robinson’s need to add muscle to his frame, joking at the time that he would not beat anyone in an arm wrestling contest. But once he could, Williams said he had little doubt Robinson could turn into a special player.

In listening to a number of interviews Robinson did last season, I was struck by his self-awareness. He not only recognized his age and that he had a lot to learn about the college game, but he understood his growth could be expedited by soaking up knowledge from veteran players around him.

With the Razorbacks, that will continue. Arkansas currently has six players in the fold with at least two years of college experience. Four players have played three seasons.

One thing is clear about Arkansas’ roster as it currently stands: It isn’t short on playmaking and shot making at the guard spot. Robinson gets the fact playing time must be earned, and he’s big on attempting to carve out a post for himself.

“I think it was a little weird at first trying to figure out what I should do and kind of what my role was on the team, but with more games coming and passes I get, I’m getting more confident in my play and playing with my teammates,” he said in January. “I wouldn’t say (I was hesitant to shoot). I think the more time I get on the floor is kind of how I’m getting to learn which shots I need to take and which shots I don’t need to take.

“I’m learning, so it’s all part of the process.”