'That moment chases you': Smart embraces his big shot 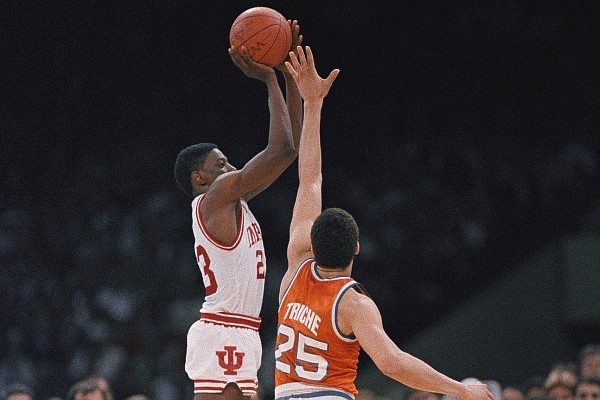 Syracuse's Howard Triche (25) tries to stop Indiana's Keith Smart from making a shot in the final moments of the NCAA Championship game in New Orleans, La., in 1987. Indiana won the last of its three championships under coach Bobby Knight in 1987, and it did so in dramatic fashion – with Keith Smart connecting on a baseline jumper in the closing seconds to give the Hoosiers a 74-73 win over Syracuse. (AP Photo/Susan Ragan, File)

FAYETTEVILLE — The University of Arkansas basketball program has been associated with big shots in the NCAA Tournament for more than 40 years.

Smart didn’t play for the Razorbacks, but they now can claim him as one of their own — and his shot that gave Indiana a 74-73 victory over Syracuse in the 1987 NCAA Tournament championship game — with his recent hiring as an Arkansas assistant coach.

“When something like that happens, I’ve always said that moment chases you,” Smart said. “It continues to chase you because you’re going to be identified with that big moment.”

Ron Brewer started Arkansas’ tradition of memorable NCAA Tournament shots in St. Louis at the 1978 Final Four, when his last-second jumper beat Notre Dame 71-69 in the consolation game in the Checkerdome.

Arguably the biggest basket ever for the Razorbacks was in their 76-72 victory over Duke in the 1994 national championship game in Charlotte, N.C., when Scotty Thurman hit a three-pointer with 51 seconds left and the shot clock about to expire to put Arkansas ahead 73-70.

“When you’re in the moment, you just think that’s what you’re groomed to do,” Thurman said in a 2014 interview with the Arkansas Democrat-Gazette. “You go out and practice and work on shooting every day and you feel like it’s just another shot that you have to make.

“But then you realize how many lives you affected and how many people come up to you and remember exactly where they were at that particular moment.”

The Democrat-Gazette talked to Reed in 2006 on the 25th anniversary of his shot that beat Louisville.

“People ask me about it all the time,” Reed said. “It never seems to get old, because every day someone makes mention of it to me.”

Reed said many of the people who have talked to him about the shot tell him what they did after he hit it.

“I started thinking, ‘Man, I almost killed some people.’“

Smart can relate to Thurman’s and Reed’s experience with fans. He said he’s often been approached by people who want to talk about his title-winning shot.

“From being in a sport for so long, I travel, my bags may have my name tag on there and people will remember and talk about the story,” Smart said. “What they were doing when that shot went in and how they felt about it.”

“I started to understand that hey, a fan comes up to you to talk about the shot … and the moment that they were involved in and what they were doing, I don’t rain on their parade,” Smart said. “I just let them live in that moment and share my excitement of winning it and taking the shot.

The club’s latest member is Gonzaga’s Jalen Suggs, who at this year’s Final Four banked in a last-second, 40-foot heave to beat UCLA 93-90 in overtime.

Jordan’s jump shot beat Georgetown 63-62 in the 1982 NCAA Tournament title game — which also was played in the Superdome — and Charles dunked an air-ball by Dereck Whittenburg in North Carolina State’s 54-52 victory over Houston in the 1983 title game in Albuquerque, N.M.

“I had a chance to be around Jordan, and we had a chance to talk about our shots,” Smart said. “[Talked with] the late Lorenzo Charles about his shot that he made. That’s a close-knit group bonded by the moment that they had. I’m sure they’ll be others that will have that opportunity.

“But being in that group, it’s always a fantastic moment when you can get into the championship and have a chance to win it all, and your shot is one of the determining factors.”

Kansas beat Memphis 75-68 in the 2008 NCAA Tournament championship game after Chalmers’ three-pointer with 2.1 seconds left in regulation tied the score 63-63.

When Smart joined the Miami Heat as an assistant coach in 2014, Chalmers played for the team.

“So my first day on the job there, he said to me, ‘You weren’t the only one to make a shot, you know,’” Smart said. “I’m sure if I meet Scotty Thurman, it will be around the same conversation.”

Smart, who made his shot over Syracuse forward Howard Triche, recalled the moment in a Fox Sports interview in 2017.

“The game was over, we finally got everybody off the floor, everyone was sitting in the locker room waiting, and Coach Knight comes in and he starts to talk,” Smart said. “And I remember he made this statement, he said to us, ‘You guys have no idea what you’ve done.’

Smart’s son, Jared, is a senior wide receiver at Hawaii who last season had 36 catches for 320 yards. On one of Smart’s catches in Hawaii’s 39-33 victory over New Mexico, he leaped for the ball, which reminded his father of a photo of how high he got on a jump shot against Syracuse.

“We put the two pictures together, and I said, ‘You know what, son? I think you might be able to out-jump me now,’” Smart said. “He just laughed. Moments like that, there’s a flashback.”