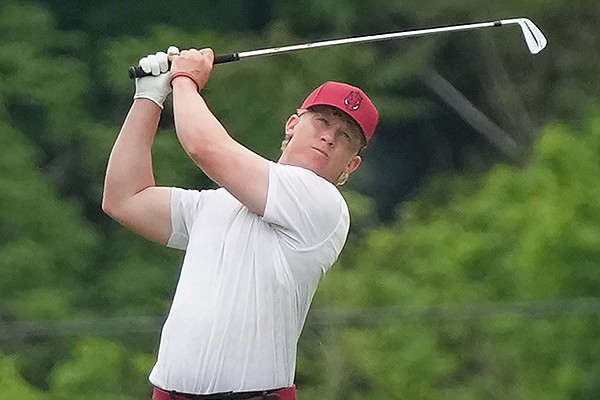 Tyson Reeder shot a 6-under 65 to lead the No. 24 University of Arkansas men’s golf team to a second-place finish at the NCAA Kingston Springs (Tenn.) Regional on Wednesday.

The Razorbacks posted a team score of 7-under 845 to move on to the NCAA Championships, which start May 28 in Scottsdale, Ariz. No. 13 Vanderbilt won the regional at 18 under, fueled by a region-best 9-under 275 on Wednesday.

“We are really proud of this team,” Arkansas Coach Brad McMakin said. “Our veteran leadership and experience was a contributing factor for punching our ticket to nationals.

“Tyson Reeder had a phenomenal last round. We are excited for this group and look forward to the opportunity to compete for a national championship in Arizona.”

The Razorbacks qualified for nationals two years after failing to move on from the NCAA Austin Regional just after they had won the SEC championships.

“We’re extremely excited, especially because two years ago kind of left a bad feeling for all of us who were playing regionals,” Reeder said. “To be back two years later and have a chance at the national championship, that’s all we could ask for.”

Each of the top-five seeds moved on from the regional, played on the 7,107-yard par-71 course at The Golf Club of Tennessee in suburban Nashville. Fifth-seeded San Diego State (-5), top seed and No. 3 Clemson (-3) and second-seeded and No. 10 North Carolina State (-3) were the others to advance.

San Diego State’s Puwit Anupansuebsai won medalist honors with an 8-under 205, but only after Reeder put forth a stiff challenge Wednesday.

Reeder had a fantastic finishing round, which featured an eagle on the par-5 seventh to go along with five birdies to break the Arkansas single-round postseason record. Reeder put a 4-iron from 233 yards within 3 feet before sinking his eagle putt.

“It never left the flagstick,” Reeder said of his long-iron shot. “That was pretty cool.”

A birdie on the par-5 17th hole pulled the senior from Edmond, Okla., into a tie for first place before he finished with a bogey, his first hole above par since midway through the second round. Reeder didn’t realize he had pulled into a tie with one hole to play.

“I had no idea where I was at,” Reeder said of his spot on the scoreboard. “My only focus was the team. I knew I was pretty close to the lead. I thought I was probably second or third.

“I kind of wish I had known. I would have played a little differently on the last hole.”

Reeder’s 206 is an Arkansas regional record by two strokes over the previous record held by Deane Pappas (1992), Craig Lile (2000) and Kolton Crawford (2014). He became the fifth Razorback to finish runner-up at an NCAA regional, joining the Pappas brothers Brenden and Deane in 1991, Deane Pappas in 1992 and Austin Cook in 2013.

Vanderbilt’s William Moll was third at 6 under, followed by a three-way tie at 5 under between Vanderbilt’s Reid Davenport, San Diego State’s Youssef Guezzale and Clemson’s Turk Pettit.

Arkansas senior William Buhl entered the final round in a tie for third place. He shot a 71 on Wednesday, his third round at par or better, to finish at 4 under and tied for seventh.

Buhl’s 14 birdies tied for third at the regional, while Reeder’s 13 birdies were tied for sixth.

Arkansas junior Julian Perico bogeyed two of his final three holes and wound up at 1-over 214 for the tournament and tied for 24th. Junior Segundo Oliva Pinto provided the Razorbacks their fourth counting score with a 2-over 73 on Wednesday and tied for 57th.

Freshman Manuel Lozada, who had counting scores the first two days, fired a 74 on Wednesday and tied for 39th.

There was very little drama down the stretch, as the top five separated from sixth-place UNC-Charlotte (-1) by four strokes. Rounding out the top 10 were Virginia (+5), Kent State (+8), Houston (+14) and Texas-San Antonio (+24).

The SEC took it on the chin at the six regional sites, with only Arkansas, Vanderbilt, Georgia and Tennessee advancing among the 12 SEC schools who qualified. Auburn, Florida and Texas A&M finished sixth at their regionals, while LSU, South Carolina, Ole Miss, Mississippi State and Alabama failed to advance, with the Crimson Tide a distant last at the Stillwater (Okla.) Regional, which concluded Tuesday.