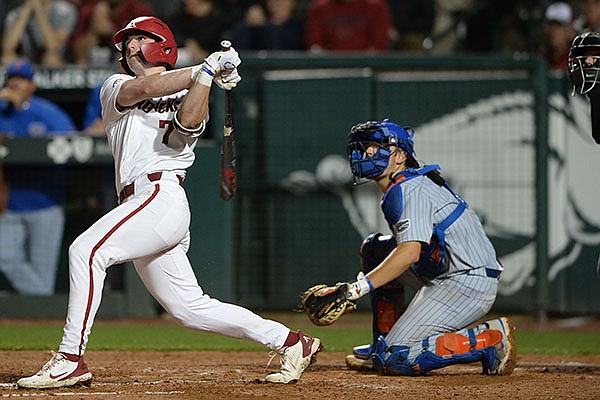 Arkansas right fielder Cayden Wallace hits his second home run of a game against Florida on Thursday, May 20, 2021, in Fayetteville.

FAYETTEVILLE — Freshman Cayden Wallace homered twice and the No. 1 Arkansas Razorbacks used their tried-and-true pitching combination of Patrick Wicklander and Kevin Kopps to thump No. 8 Florida 6-1 in a series opener on Thursday.

A season-high crowd of 11,084 with attendance restrictions lifted at Baum-Walker Stadium endured a bout of rain in the later innings to see the Razorbacks hit the 40-win mark for the 12th time in Coach Dave Van Horn’s 19 seasons.

“Just a super-good job by the team and we look forward to coming out again tomorrow and competing,” Van Horn said. “You could definitely feel the [11,000 fans]. They were loud and we really appreciate it. … The seventh inning Hog call was the best one I’ve heard in a couple of years.”

Arkansas won its seventh series-opening game in a row and has allowed one run or fewer in five of them with three shutouts. Wicklander has four wins and Kopps has a win and four saves in the string of series-opening wins.

Wicklander (5-1) struck out a career-high 11 and allowed 3 hits, 1 walk and a run while easing back in front of Kopps for the team lead in innings pitched with 62.

Wicklander struck out Florida’s Jud Fabian, who entered with 20 home runs, three times and attacked Fabian and other right-handed hitters inside.

“Whenever I’m able to get it in to righties, that’s kind of like a game-changer for me because it opens up the rest of the plate for me and opens up my breaking stuff,” Wicklander told the network. “I’m able to use all four quadrants of the zone.”

Kopps struck out 5 and did not allow a hit while throwing 39 pitches in 3 innings to post his eighth save in 59 1/3 innings.

“Three innings, 39 pitches, outstanding,” Van Horn said of Kopps. “I would say he’s available [for more work this weekend]. Just a good job throwing strikes and getting ahead.”

Wallace hit an opposite-field shot just inside the right-field foul pole off Tommy Mace (5-1) to put Arkansas ahead 2-1 in the fifth inning.

“I was hunting fastball and it was a little bit out,” Wallace said.

Wallace’s three-run homer in the eighth, his 12th, was a towering shot just inside the left-field foul pole off a Christian Scott slider.

“Yes, I knew it was going to be fair,” Wallace said. “From the previous at-bat, I got five sliders, so I just really thought he was going to throw another one.”

“He had a great night,” Van Horn said. “I mean, what can you say? Drove in four runs. Hits a solo home run to get us the lead. Hits a three-run homer pull side to not put it away completely but give us a good cushion.”

The Razorbacks fell behind early but worked Mace’s pitch count from early on while dealing the 6-6 right-hander his first loss of the year.

“I thought he pitched fine,” Florida Coach Kevin O’Sullivan said. “Arkansas is playing at a high level. They battled with two strikes and they competed.

“One of the things coming to the weekend was Arkansas has probably been the one team in our league that has figured out how to play together as a group earlier than anybody else in our league. That’s why they’re in the position they are. But coming in we were 11-4 in our last 15 in the league, and we were playing well. … We just got beat tonight.”

Florida jumped on top in the second inning on first baseman Kendrick Calilao’s no-doubt home run into the Hog Pen in left field. Calilao’s fifth home run in 20 starts was the team-high fifth allowed by Wicklander. The Razorbacks have trailed in eight of their 14 weekend series openers.

The Razorbacks squandered a good scoring chance in the third while working Mace for 28 pitches. Opitz led off with a double down the first base line, his second extra-base hit since March 28. Jalen Battles launched a deep fly to right on which Opitz scooted to third base.

Mace struck out Zack Gregory on a full count before running into control problems. After falling behind 0-2, Matt Goodheart finagled a walk, then Wallace walked on four pitches. Mace got ahead of Brady Slavens and retired him on a fly ball to center field on a 1-2 count.

Arkansas didn’t miss out on a scoring chance in the fourth after Christian Franklin was hit by a pitch to lead off and advanced on a passed ball. Hitting with two outs, Opitz knocked a grounder through the hole on the right side and Franklin scored easily on a wayward throw.

Opitz posted his second three-hit game of the season and first since a March 20 win over Alabama. His two-out single to left field off lefty Trey Van Der Weide in the fifth brought home Slavens, who had walked immediately after the Wallace solo homer to make it 3-1.

That’s where the score stood until Wallace’s crowning blow in the eighth inning, which put the Razorbacks on the brink of winning their third SEC title.