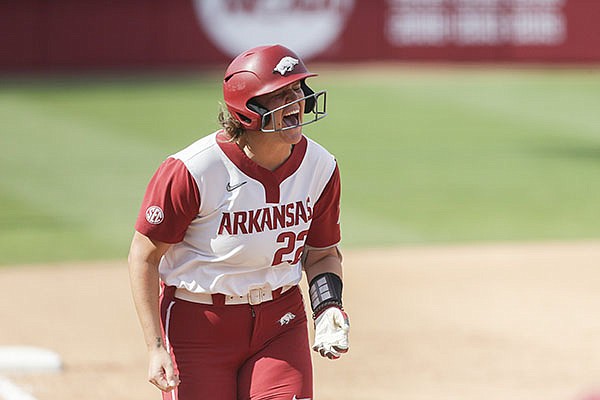 Linnie Malkin celebrates a home run while running the bases during an NCAA regional game against Stanford on Sunday, May 23, 2021, in Fayetteville.

FAYETTEVILLE — Linnie Malkin said she didn’t know much about Arkansas, the state or the softball program, when she came to a summer camp after her sophomore year in high school.

Once she got here, the Colorado native began making a name for herself by hitting tape-measure home runs for the Razorbacks, including two key ones during last weekend’s Fayetteville Regional.

Malkin’s three-run home run in the top of the fifth inning proved to be the clincher in Arkansas’ 7-3 win over Stanford on Sunday at Bogle Park. That capped a big weekend for the junior, who went 4 for 9 with 2 home runs and 7 RBI.

Malkin At a Glance

Notable Went 4 for 9 with 2 home runs, a double and 7 RBI to help the Razorbacks win the Fayetteville Regional last weekend. … Ranks second on the team and third in the SEC with 18 home runs. … Named second-team all-region by the National Fastpitch Coaches Association this season. … Led the team with six home runs and 24 RBI last season, which was cut short by the coronavirus pandemic. … Hit two home runs in her first college game in 2018.

Malkin and her mother made the 11-hour drive to Fayetteville and kept coming back. She fell in love with the program, the town and the area.

“The facilities were just incredible,” Malkin said. “The nature here is amazing. I’m an outdoor person, so that drew me here.

“I really had no expectations. I had really no idea what it would be like out here. But then I just kept coming back to camps. I came to like three more, I think.”

“You know, she kinda found us,” Deifel said. “She put herself on the radar. When she came out to one of our camps, then we’re like, ‘Holy crap, this kid can flat swing it.’

“We started tracking her from there, and she took a chance on us.”

Malkin has evolved into a consistent power source as the Razorbacks claimed the No. 6 national seed. Her 18 home runs are second on the team and the third most in the SEC. She hit only 10 combined in her first three seasons, but she had a team-best six in the covid-shortened 2020 season.

Deifel said the bubbly, free-spirited Malkin put pressure on herself in past years, but she’s changed in a big way.

“She is just playing really freely and understanding the ups and the downs,” Deifel said. “She has a new confidence this year, a new approach to the game that allows her to enjoy it and be free.

“I think we’re seeing her at her absolute best right now and still think there’s better in her.”

Malkin acknowledged the difference, too. She said as the designated player for the majority of the season, hitting is her only focus. That makes the approach to the game simpler, but it’s more than that.

“I’m pretty much playing like I’m a 10-year-old again,” she said. “I just try to have as much fun as I can with my teammates and stay relaxed in the box.”

The pressure partly stemmed from the relationship with her father, who also had been her softball and baseball coach growing up.

“I don’t really have the best relationship with him, and this past covid year I’ve been kinda set free from him and all the pressure he’s put on me,” Malkin said. “I think that has played a huge role in it. Kinda no more outside pressure from him and just trusting myself.

“He’s pushed me to be the best that I could be, but at some point you can push a little too hard as a parent and as a coach. So not having that has been the biggest thing.”

Malkin said she thought about leaving Arkansas after her sophomore season when she started just five games. There was some frustration about not playing as much as she wanted, but she stayed the course.

“I just knew it wasn’t the right choice to leave this team and this coaching staff, especially,” she said. “They just had such high hopes for me and pushed me to stay and to just keep doing what I was doing because they knew my success would show, and it did.”

Deifel said Malkin’s offensive production is not the only boon for the team.

“If you were to ask our team who keeps them together, everybody would say Linnie,” Deifel said. “She’s just like the glue that kinda connects everyone.

“She’s such a talented hitter, but this team is not the same if we don’t have her personality every day. And who she is as a human.”

Malkin and the Razorbacks head into this weekend’s super regional with confidence, which is different from their last trip to the super regional in 2018.

“It was kinda like, ‘Oh crap, we gotta go play Oklahoma,’ ” Malkin said. “But this time I feel like we’re on top of the world, and you can put anyone in front of us and we know we’re gonna give it our all. And the outcome will probably be in our favor because we just have that chip on our shoulder.