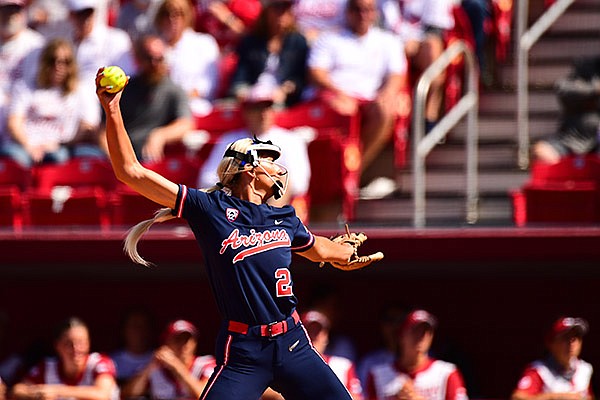 Arizona pitcher Alyssa Denham throws during an NCAA super regional game against Arkansas on Saturday, May 29, 2021, in Fayetteville.

FAYETTEVILLE — Arizona advanced to the Women’s College World Series on Saturday with a 4-1 victory over Arkansas at Bogle Park.

The Wildcats swept the Razorbacks in their first home super regional. Arizona, an eight-time national champion, is in the Women’s College World Series for the 24th time.

Arizona (41-13) scored twice in the bottom of the fifth and sixth innings after Arkansas took a 1-0 lead in the top of the fifth on Braxton Burnside’s double to score Ryan Jackson. The Razorbacks missed on an opportunity for more in the inning when Linnie Malkin flied out with the bases loaded.

Sharlize Palacios’ one-out single busted up a perfect-game bid by Arkansas pitcher Autumn Storms in the bottom of the fifth. Alyssa Palomino followed with a two-run home run to put the Wildcats ahead 2-1.

Arizona plated two more on Carlie Scupin’s two-out single against Storms in the sixth. The Wildcats loaded the bases on two errors and a walk.

Alyssa Denham (19-8) pitched a complete game for Arizona. She allowed 4 hits, walked 3 and struck out 4.

Arkansas (43-11) lost 10-4 on Friday in the first game of the super regional. The Razorbacks are 0-4 all-time in super regional games.