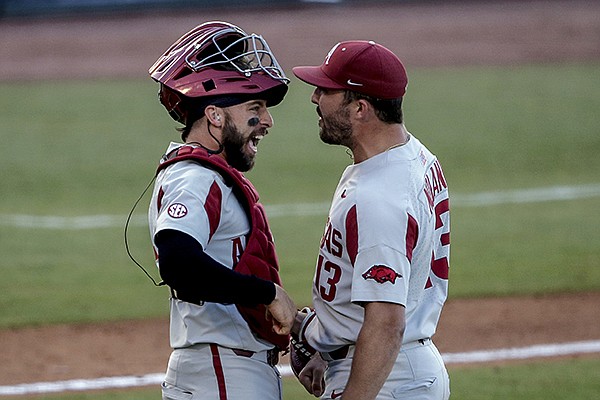 Arkansas catcher Casey Opitz, left, celebrates with pitcher Connor Noland (13) after the team's 3-2 win over Ole Miss in an NCAA college baseball game during the Southeastern Conference tournament Saturday, May 29, 2021, in Hoover, Ala. (AP Photo/Butch Dill)

A University of Arkansas relief pitcher closed the Razorbacks’ 3-2 victory over Ole Miss on Saturday in the SEC Tournament semifinals at Hoover Metropolitan Stadium in Hoover, Ala., with three shutout innings.

For a change, it wasn’t Kevin Kopps.

Kopps, the SEC pitcher of the year who has gone three or more innings and as many as 4 1/3 in finishing 14 of the Razorbacks’ 23 victories over conference opponents, watched from the dugout as Connor Noland did the job instead.

Noland, a junior right-hander from Greenwood, didn’t allow a hit and had one walk with four strikeouts while holding down the Rebels for his first save.

“It felt awesome,” Noland said. “Obviously, it’s a different role that I’m used to, but I’ve been watching Kevin do this all year. So he kind of gave me some inspiration.”

The No. 1 Razorbacks (45-10) advanced to the SEC Tournament championship game, where they’ll play No. 4 Tennessee at 2 p.m. Central today.

Arkansas is 0-4 in its previous four championship game appearances, most recently losing to LSU 4-2 in 2017.

“I think it would be big for our program to win the tournament,” Van Horn said. “Arkansas has never won it. So we’re going to do the best we can.”

As it turned out, Kopps wasn’t needed because Noland was so effective.

“We were going to go with Connor a couple innings,” Van Horn said. “But he threw so well, we said we’ve got to let him finish.”

The No. 11 Rebels (41-19) tied it with two runs in the fifth inning on a two-run double by Jacob Gonzalez after TJ McCants and Justin Bench walked.

Tole struck out Tim Elko swinging and got Hayden Dunhurst on a groundout to leave the go-ahead runs stranded.

“We had a couple opportunities where, if we would have hit one in the gap, maybe it would have been different,” Ole Miss Coach Mike Bianco said. “But credit them. They’re so good and pitched it really well, played really good defense.”

Arkansas regained the lead 3-2 in the sixth inning on a two-out double by Jalen Battles that scored Charlie Welch, who drew a walk.

After Tole pitched a scoreless sixth inning, Noland took over.

Razorbacks starter Caleb Bolden went four shutout innings before Zebulon Vermillion came in and threw just three pitches before leaving with a biceps cramp. Monke relieved him but walked 3 and gave up 1 hit while recording just 1 out.

After Tole, the Razorbacks were running low on options for the end of the game after Van Horn decided not to use Kopps.

“We discussed a couple of pitchers and decided to go with Noland, and Connor didn’t disappoint,” Van Horn said. “He was really good.”

Noland was a starter the previous two seasons, but he wasn’t in the rotation to start this season and then missed a month because of a strained forearm. He had pitched just 7 2/3 innings going into Saturday’s game.

In Noland’s first game back after his injury, he allowed 6 runs and 6 hits in two-thirds of an inning at LSU.

On Saturday, Noland looked like an entirely different pitcher.

“I just saw confidence out of him,” Arkansas catcher Casey Opitz said. “He came in the game, and he was ready to go. All his stuff was really working. It looked like it was working at LSU. He just didn’t come out with that killer mindset.

“[Saturday] I could see it in his eyes that he was ready to go from the jump, and that’s what made the difference for him.”

Noland said Saturday’s game did a lot for his confidence.

“Obviously, I’ve been through struggles this year,” he said. “It hasn’t gone the way I planned, but I knew my time was going to come in a big spot in a big situation like this.”

Noland said he was back to executing at his best.

“Just putting pitches where I want to and not leaving anything too far out over the middle of the plate,” he said. “It’s just been a good progression throughout the year and coming back.”

“Stuck with the two-seam and big curveball, didn’t throw any sliders,” Noland said. “That was really my only two-pitch combo. Threw a couple of change-ups also, but I was really sticking with the curveball.”

After Noland struck out Kemp Alderman and McCants to end the game, catcher Casey Opitz gave him a hug and words of encouragement.

“I think I just said, ‘That’s you,’ and I kept repeating it,” Opitz said. “Like that’s the guy I’ve seen in the past, and that’s what he can do for this team. He showed it today. So I was pumped for him.”

Van Horn said he’s not sure who will start today’s game or whether Kopps will be available or continue to rest up for an NCAA regional.

Whatever Van Horn and pitching coach Matt Hobbs decide to do, the Razorbacks showed against Ole Miss they could win a close game against a quality opponent without Kopps.

“We won a lot of games without Kevin, but we scored a lot of runs,” Van Horn said. “I think it’s great that we went out and won a one-run game without him.”