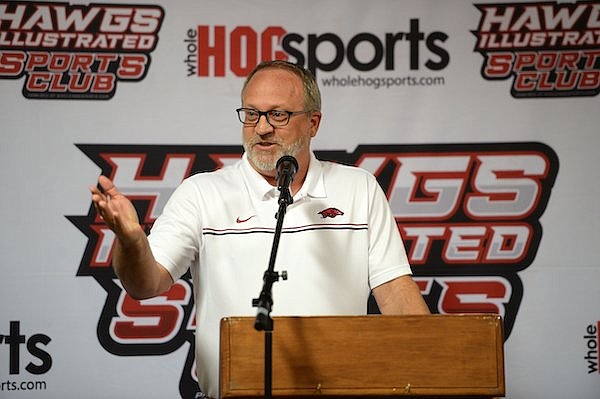 FAYETTEVILLE — Mike Neighbors isn’t sure what the finished product will look like, but he’s intrigued to see how his University of Arkansas women’s basketball team progresses with a roster full of newcomers.

“I don’t know what the end of this picture looks like with this team yet, but we have unique pieces,” Neighbors said during a virtual media day held Wednesday. “We have unique pieces that I’ve never had all under the same roof or on the same team at the same time. So it’s been a lotta fun for our staff.

“So new challenges for us as a staff. New challenges for them as players to get it together and build it into a cohesive puzzle that we all know what it can and should look like. We’re going to have some work to do on role development and shot distribution and playing time but that’s what is fun about this.”

Arkansas hosts the University of Arkansas-Fort Smith in an exhibition game to begin the season at 6 p.m. Friday at Walton Arena, then opens the season by hosting Tarleton Sate five days later.

Sharp-shooting guard Amber Ramirez is the lone senior on the roster, and junior guard Makayla Daniels comes in with a string of 60 consecutive starts in her Razorbacks career.

The 5-9 Daniels has become more of a vocal leader than just by example this season, Neighbors said.

The Razorbacks won’t be looking to replace high-scoring Chelsea Dungee or Destiny Slocum, who both moved on to the WNBA, with any one player, Neighbors said. It’s going to be more of a group effort, especially initially.

“It will be by committee at first,” Neighbors said. “I do think there will be somebody that settles in and takes that role and makes it their own. The experience factor is the one thing that you can’t replace. That does not just get replaced, especially with first- and second-year kids.

“There’s been a time that we’ve relied on two or three individuals probably, too much. That’s not going to be the case moving forward with the team we have.”

Freshman Jersey Wolfenbarger and sophomore transfer Sasha Goforth are just two newcomers who are expected to make an impact.

Wolfenbarger and Goforth both have Northwest Arkansas roots and each earned McDonald’s All-American honors coming out of high school.

The 6-0 Goforth, who is from Fayetteville but transferred after a standout freshman season at Oregon State, acknowledged the change wasn’t easy.

“It was definitely a transition coming to a new place,” said Goforth, who was named to the All-Pac-12 Freshman Team. “It’s two completely different systems but I personally feel like I fit in pretty well now that I’m adjusted. Arkansas likes to run and I like to run, too.

“I like to play fast. They like to score fast and I think I fit in pretty well to all that.”

Neighbors’ positionless system is great for the 6-foot-6 Wolfenbarger, she said.

“He gives you that freedom, but he lets you play with joy,” said Wolfenbarger, who played at Fort Smith Northside. “And I think that’s a big thing and that’s really why I chose to come here was because just it fit me the best because it allowed me to play free.”

Samara Spencer, a 5-9 freshman guard from Fort Lauderdale, Fla., may be the biggest surprise of preseason camp.

“We knew she was good, but we didn’t have any idea how freshman ready she would be,” Neighbors said. “… Very, very much like Makayla Daniels and the two kids who have kind of moved from the furthest out to come to school here have been two of the most freshman ready guards I’ve ever been a part of.”

Neighbors said he was impressed with his team’s physical condition following a closed-door scrimmage against Kansas last week, and the team’s depth along with improved defense and rebounding were also on display.

“We are in better shape than I expected we might be,” Neighbors said. “I know that our strength and conditioning staff do a great job, but you never know until you get out there. I thought we played really well for a long period of time.”

Kansas Coach Brandon Schneider even complimented the Razorbacks on their rebounding, something that hasn’t happened often, Neighbors said.

“[He] said, ‘Man, ya’ll really hurt us on the boards,’ ” Neighbors quipped. “That has never been uttered to me following any game ever. So that’s a plus.”

Maryam Dauda, another McDonald’s All American who played high school basketball at Bentonville, could be an additional piece to add even more length at 6-4. She suffered a knee injury near the end of her final high school season, but is ahead of schedule in her recovery.

Neighbors said that decision whether to redshirt this year or possibly come back somewhere during mid-season will be up to her and her family.