Still Bama: Pittman says Tide what you expect to see 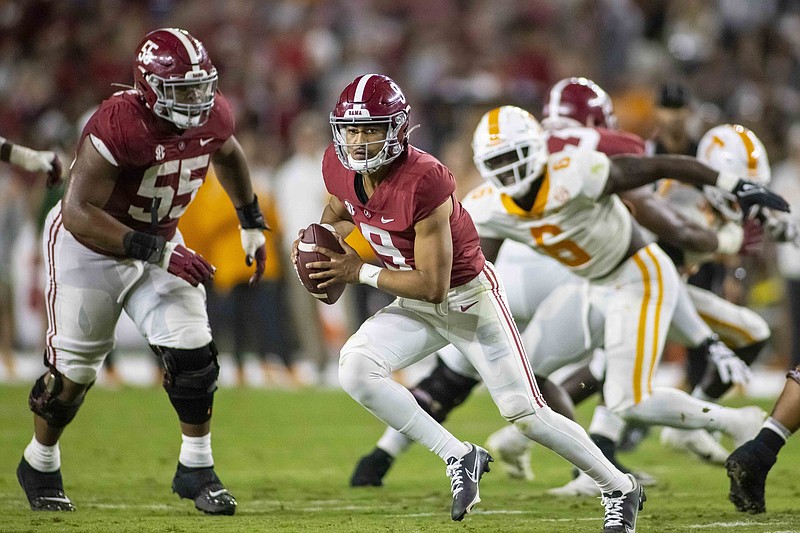 Alabama quarterback Bryce Young (9) threw for 371 yards and two touchdowns against Tennessee on Saturday, in Tuscaloosa, Ala. The Crimson Tide rose to No. 3 in The Associated Press poll with their second victory in a row since a loss to Texas A&M on Oct. 9. (AP/Vasha Hunt)

FAYETTEVILLE — Usually when the Arkansas Razorbacks play Alabama, the Crimson Tide are No. 1.

Alabama was No. 1 in eight of its previous 11 games against the University of Arkansas, including the past five.

Alabama is all the way down to No. 2.

The Tide were No. 1 to open the season in The Associated Press and USA Today coaches polls, but after losing at Texas A&M 41-38 on Oct. 9, Alabama was replaced at the top spot by Georgia.

Alabama fell to No. 5, but is back up to No. 2 in the College Football Playoff, AP and coaches polls following a four-game winning streak. The Tide won 49-9 at Mississippi State and at home against Tennessee 52-24, LSU 20-14 and New Mexico State 59-3.

Arkansas Coach Sam Pittman smiled when asked if Alabama — which beat the Razorbacks 52-3 last season en route to a 13-0 record and its sixth national championship under Coach Nick Saban since 2009 — looks any less imposing having suffered a loss to the Aggies and being pushed to the limit by LSU.

OVERSET FOLLOWS:“No,” Pittman said. “No, no, no. Very, very talented. They have elite skill. Big offensive and defensive linemen. They have an elite pass rusher. More than one.

“I mean, they’re Alabama. When you turn on the film, they’re what you expect to see.”

Alabama is 14-0 against Arkansas under Saban and has outscored the Razorbacks 584-200 in those games, but the Tide won’t be lacking for incentive Saturday.

If Alabama wins, the Tide will clinch the SEC West title and a matchup with Georgia in the SEC Championship Game at Atlanta on Dec. 4. Saturday also will be the final home game for Alabama’s seniors before they finish the regular season at Auburn.

“Have a lot of fun, enjoy it,” Tide senior defensive lineman Phidarian Mathis said of his final home game. “Make a lot of memories for my last ride here.”

Despite losing the Heisman Trophy winner in receiver DeVonta Smith as well as quarterback Mac Jones and running back Najee Harris — all NFL first-round draft picks along with receiver Jaylen Waddle and offensive tackle Alex Leatherwood — Alabama is averaging 44.6 points and 484.7 yards per game to rank third and 10th nationally.

Metchie leads Alabama in receptions with 67, but his 722 yards are a 10.8-yard average to go with 6 touchdowns.

Jameson Williams, a junior transfer from Ohio State, has been the Tide’s big-play receiver with 51 catches for 1,028 yards — a 20.2-yard average — and 10 touchdowns.

“Jameson is exactly what we looked for in the offseason,” Saban said. “We wanted a fast, vertical threat that could take the top off the defense, and a lot of the routes and big plays that he makes are designed for him because of who he is and what his skill set is.”

Senior Brian Robinson is Alabama’s leading rusher with 164 carries for 823 yards and 14 touchdowns. He also has 23 catches for 205 yards and 2 touchdowns.

“B-Rob has been a real consistent performer for us,” Saban said after Robinson rushed 26 times for 107 yards and 3 touchdowns against Tennessee. “I think that the more he plays, the better he gets.

“He’s been a really effective runner. He’s got power. He makes people miss. I think the biggest thing he’s improved on is being a very consistent receiver. He’s catching the ball very well and making plays in the passing game, which was one of the things that he needed to improve on, and I think he’s done a fantastic job of that.”

The Tide defense, led by Will Anderson, is holding opponents to 288.3 yards and 18.2 points on average to rank fifth and 12th nationally.

Anderson, a sophomore outside linebacker, has 67 tackles with 23 for 94 yards in losses, including 12 1/2 sacks.

Junior linebacker Henry To’oTo’o, a transfer from Tennessee, leads the Tide with 71 tackles and has two sacks.

“There’s always something to improve on,” Mathis said. “We’re not there yet, but as we go on we’ve done better every game and every week.

“We go out and take care of business by everybody buying in and doing their jobs and everybody sticking together.”

New Mexico State (1-9) scored first against Alabama with a 50-yard field goal by Ethan Albertson and the Tide led 14-3 after one quarter before pushing their lead to 49-3 by halftime.

The first quarter score prompted a question to Saban in his postgame news conference about Alabama starting slow.

“I think you’ve really got to be digging deep,” Saban said, clearly annoyed. “You know, it’s hard to win. I see people getting beat – what was the Florida score today against Samford?”

Florida came back to beat Samford 70-52 after trailing 42-28 in the second quarter.

“I mean, do you want me to be critical of my team because we had to punt once in the first quarter and they got a field goal?” Saban continued. “I mean, I’m not going to do it.

“[New Mexico State] did a couple things, we made a couple mistakes. They did some things different, we adjusted to it.

“I think the players did a good job. I’m not going to be critical of anything that our players did when we win 59-3.

“So not a good question, incidentally.”

It ended up being the last question of the news conference.