Arkansas vs. Virginia Tech in the NCAA Soccer Tournament: How to watch, forecast, notables 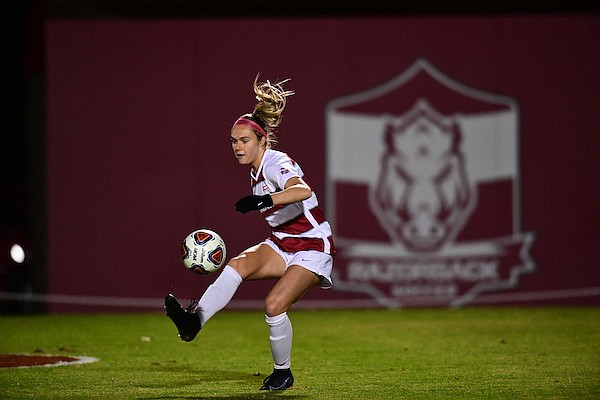 Arkansas' Anna Podojil kicks the ball during an NCAA Tournament game against Northwestern (La.) State on Friday, Nov. 12, 2021, in Fayetteville.

LAST MEETING Virginia Tech defeated Arkansas 1-0 in double overtime on Nov. 16, 2018, during the second round of the NCAA Tournament in Cary, N.C.

TELEVISION The game will be streamed on SEC Network-Plus and can be accessed via WatchESPN.com or the ESPN app (carrier login required).

WEATHER According to the National Weather Service, Friday night will be mostly cloudy with a high of 54 degrees and a low of 38 degrees in Fayetteville.

NOTABLE The winner will advance to play Sunday against the winner of Friday's match between Notre Dame and Purdue, which will be played at Razorback Field beginning at 3:30 p.m. The losing teams Friday will be eliminated....Arkansas has been eliminated by an ACC team five times in the NCAA Tournament, including each season from 2016-19. Virginia Tech eliminated the Razorbacks in 2018....Arkansas defeated Northwestern (La.) State 5-1 in the first round last Friday. Virginia Tech advanced with a 3-1 win over Ohio State....Since 2018, the Razorbacks are 33-3-2 on their home field....Arkansas has only advanced past the second round of the NCAA Tournament once, in 2013 when the Razorbacks defeated St. John's before a season-ending loss to Duke. With two wins this weekend, Arkansas would advance to the Elite Eight for the first time....Virginia Tech played Duke and North Carolina to ties this season. Arkansas lost to both teams to open the 2021 campaign....Arkansas is hosting a second-round game for the first time.