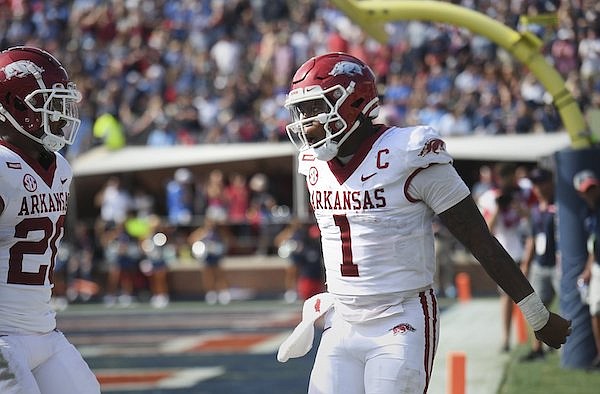 Arkansas quarterback KJ Jefferson (1) celebrates a touchdown during a game against Ole Miss on Saturday, Oct. 9, 2021, in Oxford, Miss.

OXFORD, Miss. — It’s hard to find fault with an offense -- and that goes especially for the quarterback and the play caller -- that totaled 676 yards and was perfect in eight trips to the red zone.

But that’s what some might do after Arkansas quarterback KJ Jefferson failed on a two-point pass play after time expired in a 52-51 loss to Ole Miss on Saturday at Vaught-Hemingway Stadium.

Second guessing that deciding play -- or the execution -- would fail to consider an otherwise magical performance by Jefferson.

Jefferson needed only to complete that pass to join the likes of Hunter Henry, Matt Jones, Connor Limpert and the Buddy Bob Benson-Preston Carpenter tandem with unforgettable performances against the Rebels.

Who knows, if Jefferson had found a way on that last play, Arkansas fans might have been clamoring for a name as they did in 1954 when the Benson-to-Carpenter pass produced the roots of the Powder River Play.

Instead, coach Sam Pittman was left to just say that it was a play he liked all week as offensive coordinator Kendal Briles called it in practice as the potential two-point play against the Rebels.

The big quarterback from nearby Sardis, Miss., did nearly everything else in grand fashion with nearly three dozen friends and family cheering him on a record offensive day.

Ole Miss coach Lane Kiffin, upset at his defense, said it was the only play when his team stopped the Hogs the entire second half. The Razorbacks made 400 yards after intermission.

Pittman knew that feeling, too.

Ole Miss quarterback Matt Corral, the goat last year in Fayetteville with six interceptions, was terrific this time. In a great effort running and passing that might propel him back into Heisman Trophy conversations, Corral’s team did not commit a turnover while averaging 8.7 yards. He threw for 287 yards and ran for 94.

Corral engineered big play after big play, many on stretch-run handoffs when the Hogs were set to rush the passer.

The Hogs committed the game’s only two turnovers. There was also a missed field goal and a key missed opportunity when they had to settle for a field goal after their only fourth-down stop on four gambles by Kiffin.

Jefferson, intercepted on a Hail Mary to end the first half, missed Warren Thompson in the end zone before the Hogs settled for a game-tying field goal on that big break in field position in third quarter.

Arkansas coach Sam Pittman wanted no part of Corral in overtime. He instructed offensive coordinator Kendal Briles to prepare a two-point play during the final drive. It was a run-pass play with three options.

The Hogs first lined up with an empty backfield. Running back Dominque Johnson and AJ Green then moved to either side of Jefferson.

The first option was for a shovel pass to Johnson, flowing behind three offensive linemen ready to escort Johnson into the end zone. But two rushers were chasing Jefferson, giving ground to his right, with no clear path for the pitch to Johnson.

Green was open for a split second on a dash toward the right front pylon, but was quickly covered. Jefferson lofted a pass to the back of the end zone for a covered Treylon Burks and it was incomplete.

“I liked that play all week,” Pittman said. “I thought the pitch (to Johnson) was there. I don’t know. I’ll have to look at tape. The end did not go out. With that look, we should have pitched it.”

Jefferson said the look to Johnson “was muddy in the hole, so I brought it outside and tried to make a play.”

Any pass into the end zone would not have counted anyway. Center Ricky Stromberg released well into the end zone and was flagged for an ineligible linemen downfield. It ended what Pittman called “a heck of a game, just one point short.”

The difference, he said, was just a few missed opportunities on offense — too many to offset a poor defensive performance. The Rebels had 611 yards.

“We put the ball on the ground and missed a field goal and they didn’t,” Pittman said. “A bunch of (the defensive problems), we didn’t tackle. On the open field runs, we just couldn’t get the guy on the ground.

“By far it was our poorest tackling game. We couldn’t fill the gap from the safety spot on a simple stretch.”

Ole Miss made 324 yards on the ground. The stretch play, turned up by the running backs inside the defensive end, produced second-half dashes of 33, 14, 51 and 34, the last two of which went for touchdowns.

Arkansas linebacker Hayden Henry said the Rebels exploited the three-man front like no one had this season. The way they ran the stretch play was different.

“They had a couple of things different in the way they attacked us in the run game,” Henry said. “We have not seen that against our three-front. We made some corrections, but they still gashed us.

“They were hitting us in a weak spot. They were creating an extra gap on the edge and there was no one there to fill it.

“They cut us off on the back side and we couldn’t get it fixed. It was a great play design. Props to them.”

“(Corral) played great,” Pittman said. “They got behind us and he was on the money. Plus, we couldn’t get him on the ground. We had opportunities to tackle him and we couldn’t.

“We tried to get our corners and safeties involved in stopping the run game and the (receivers) started to run by us. We were keeping people on the backside for the quarterback runs — actually both teams were. But that happened to us.”

The poor tackling, Pittman said, might be partly because of wear and tear at the midpoint of the season.

“We are beat up,” he said. “We’ve got bumps, bruises, broken hands. That’s part of it, but we can tackle better. We've got to figure that out. We had a lot of people banging off legs.”

Arkansas missed two scoring chances in the first half, losing a Raheim "Rocket" Sanders fumble at the Ole Miss 27 and after reaching the 29 when Cam Little missed a 50-yard field goal.

Arkansas led 14-6 when Jefferson engineered long touchdown marches with their second and third possessions of the game. They were sandwiched around a 17-play Ole Miss TD drive that included three fourth-down conversions.

The Hogs opened the scoring with a 15-play, 82-yard drive that was mostly Jefferson. He carried six times for 32 yards and completed all three of his passes. Jefferson faked the toss sweep to score on a 5-yard run.

Corral scored on a similar 5-yard TD run for the Rebels. The conversion kick was wide left. All but one of the gains in the drive were less than 10 yards.

The Hogs faced only one third down while driving 75 yards in nine plays. Ole Miss helped with a face mask penalty. Trelon Smith opened the possession with a 19-yard run on an option pitch. He finished it with a 14-yard dash over right guard to put Arkansas ahead 14-6.

The Rebels pulled even in a hurry. Henry Parrish caught the Hogs pinched too tight on the edge and circled right end for 16 yards on the first play. On the next, Corral found Dontario Drummond alone behind the right side of the UA secondary for a 67-yard TD pass. Cornerback Montaric Brown and safety Simeon Blair both took the same short route, turning Drummond loose behind them. Corral kept on the two-point play to make it 14-14.

The Hogs made 6, 21 and 12 on their next three plays, and Sanders had 9 on a spinning, hard-charging run before losing the ball fighting for a first down. The defense responded with a three-and-out, the second of the half.

Jefferson gave way to backup Malik Hornsby for one play, a 7-yard loss when the fleet quarterback tried to reverse his direction on a sweep. Jefferson hit Thompson for 14, then converted fourth-and-2 with another Thompson reception. But on third-and-6, Jefferson’s empty backfield draw lost three yards and Little was wide right on the field goal.

The Rebels took the lead with a 9-play, 68-yard march late in the second quarter. Corral faced only one third down and did damage running and throwing. He covered the final yards standing up with a 7-yard dash through the middle. That put Ole Miss ahead 21-14 at halftime.

Arkansas mismanaged the clock on the final possession of the half. Jefferson’s Hail Mary was intercepted in the end zone on a pass from the Ole Miss 41.

A 33-yard dash by Snoop Connor set up a 50-yard field goal as the Rebels had the first possession of the second half and stretched their lead to 24-14.

The Hogs answered with a 9-play, 75-yard TD march with Jefferson finding Trey Knox for the final 3 yards to pull within 24-21.

The defense provided a shot at the lead with a fourth-down stop at the Ole Miss 33. On second-and-7 from the 15, Jefferson missed Thompson, open on a hook in the middle of the end zone. Little booted a 31-yard field goal to tie the game 24-24.

There would be only two defensive stops the rest of the game, one by each team. They traded punts in the middle of the fourth quarter.

Ole Miss responded with a 10-play, 75-yard march to make it 38-31. Corral’s 13-yard scramble on third-and-10 kept things alive in the middle of the drive. Connor rolled the final 34 yards.

Corral found Braylon Sanders for a 59-yard bomb that set up Connor’s 1-yard TD run to break the tie with 9:01 to play. The Hogs stalled after Jefferson’s only sack, but the defense held and Jefferson led an 8-play, 65-yard march to pull even again at 45-45 with 1:22 left.

It took Corral just two plays to get the lead back. After a 7-yard Conner run, Sanders sailed past Brown for the bomb. Brown seemed to bite on a fake and wasn’t close.

The Hogs used the final 1:07 on a 9-play march with Jefferson completing 7 of 8 passes. The final play, launched with 1 second left, was a 9-yard completion to Thompson. The 6-4 receiver had started in motion from the left slot, circled behind Jefferson then alone in the back of the end zone as the quarterback waited patiently.

It left the Hogs with their most ever total yards in an SEC game, eclipsing 661 at Mississippi State in 2016. Pittman was left to praise one half of his team while pointing out the failings of the other half.

They return to Fayetteville after three straight out-of-state games. The Hogs (4-2, 1-2 SEC) play host to Auburn at 11 a.m. next Saturday for Homecoming.

“We are going to stay together,” Pittman said. “We’ve got Auburn coming and we have not lost a game at home.”