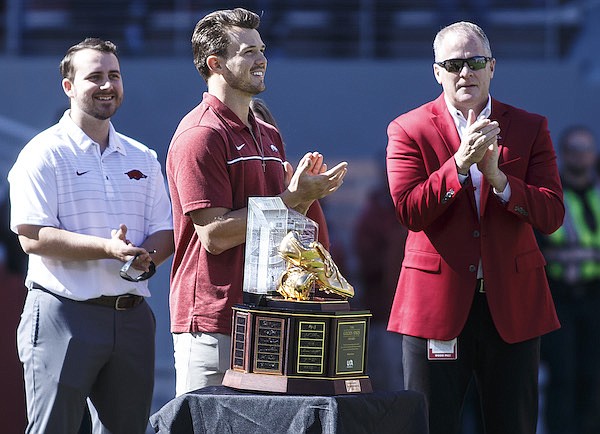 Former Arkansas pitcher Kevin Kopps (center) is shown with the Golden Spikes Award during the Razorbacks' football game against Auburn on Saturday, Oct. 16, 2021, in Fayetteville.

FAYETTEVILLE — Former Arkansas pitcher Kevin Kopps is one of five finalists for the AAU Sullivan Award, which is presented annually to the best amateur athlete in the U.S.

Kopps won the Golden Spikes Award and Dick Howser Trophy — the top individual awards in college baseball. He also won the Stopper of the Year Award as the game’s best relief pitcher.

The Razorbacks were 28-5 in games during which Kopps pitched. Arkansas finished the season with a 50-13 record and won SEC regular-season and tournament championships.

Kopps was selected by the San Diego Padres in the third round of the MLB Draft and advanced to the organization’s Triple-A affiliate in El Paso, Texas, by the end of the season.