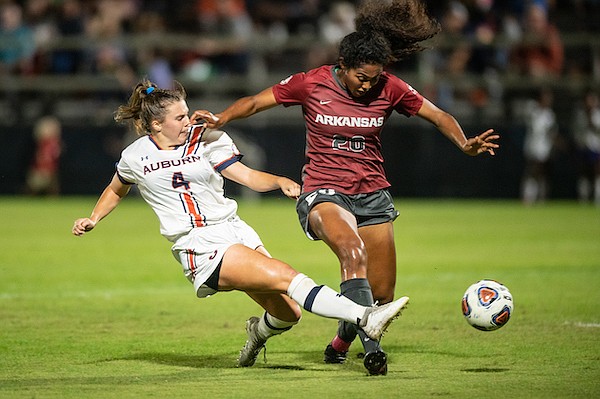 The No. 4 Razorbacks won their 13th consecutive game, 2-0 at No. 19 Auburn. The win, coupled with losses by Tennessee and Ole Miss on Thursday, ensured Arkansas at least a share of the conference title.

Arkansas (13-2, 8-0 SEC) can clinch the championship outright with a home win over Mississippi State on Sunday at 6 p.m.

Anna Podojil scored on a rebound in the 35th minute and Kayla McKeon added one in the 69th minute. The Razorbacks out-shot the Tigers 16-6, including 7-3 on goal.

Podojil’s team-leading 10th goal came on a rebound after a free kick from around 30 yards away. Auburn goalkeeper Maddie Prohaska fell down after punching away the ball, and Podojil scored into an empty net.

McKeon’s goal came on a long cross from near midfield. McKeon got behind three Auburn defenders and kicked left footed to the far post from just outside the 6-yard box.

Hannah Warner had three saves for the Razorbacks. Prohaska had five saves and allowed both goals for Auburn (11-4, 5-3).

Arkansas entered Thursday with a one-game lead over Tennessee and Ole Miss. The Razorbacks beat both teams earlier this season.

Ole Miss lost 2-1 at Missouri in regulation Thursday, and Tennessee lost 2-1 in overtime at Vanderbilt.

Arkansas had not won a conference championship prior to 2019. The Razorbacks repeated last season when they shared the title with Texas A&M. Arkansas was the top overall seed at least year’s SEC Tournament by virtue of a head-to-head win over the Aggies.

The Razorbacks can clinch their third consecutive SEC West championship with a win Sunday. Unlike the league’s overall standings, division standings are based only on games against other division teams.