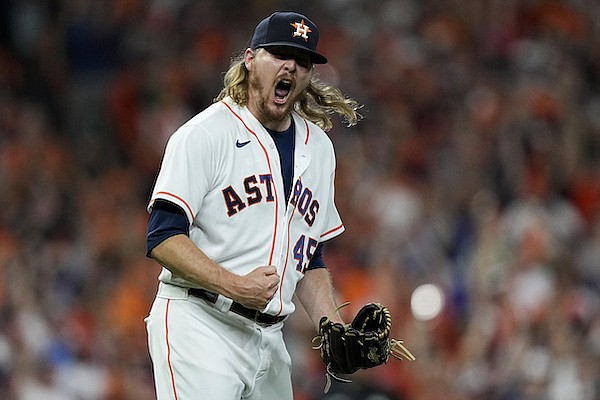 The Arkansas Razorbacks will have a former player win a World Series ring in 2021.

Two former Arkansas pitchers are expected to be on rosters for the World Series between the Atlanta Braves and Houston Astros. Drew Smyly is a starter for Atlanta and Ryne Stanek is a reliever for Houston.

Smyly, a Little Rock native, pitched for the Razorbacks from 2008-10. Stanek, who grew up near Kansas City, pitched at Arkansas from 2011-13.

Stanek was a first-round selection of the Tampa Bay Rays in the 2013 MLB Draft. Smyly was drafted by the Detroit Tigers in the second round in 2010.

Both are under one-year contracts in their first year with their respective teams.

Stanek, 30, has been one of the Astros’ top relievers this postseason. He has pitched 6 2/3 innings over 8 games and has allowed 1 run on 3 hits and 1 walk, and struck out 6.

Stanek earned postseason wins in Game 2 of the American League Divisional Series against the Chicago White Sox and in Game 1 of the AL Championship Series against the Boston Red Sox. Stanek closed the Astros’ Game 5 ALCS win over the Red Sox in a non-save situation.

Smyly has not started for the Braves this postseason, but came out of the bullpen for 3 1/3 innings in Game 4 of the National League Championship Series against the Los Angeles Dodgers last week. He allowed 2 runs on 2 hits, walked 1 and struck out 2 in his first outing in 18 days.

Smyly has pitched eight MLB seasons for six franchises. He pitched twice in relief for the Tigers in the 2012 World Series that was won by the San Francisco Giants.

He missed the 2017 season following Tommy John surgery and pitched just once the following season in the minor leagues.

Smyly and Stanek narrowly missed on being teammates twice. Stanek arrived on the Arkansas campus as a freshman two months after Smyly's college career concluded in 2010, and Smyly was traded by the Rays four months before Stanek made his MLB debut with the franchise in 2017.

CORRECTION: An earlier version of this story incorrectly stated Drew Smyly had never pitched in the World Series.