Georgia at the head of the class in the SEC 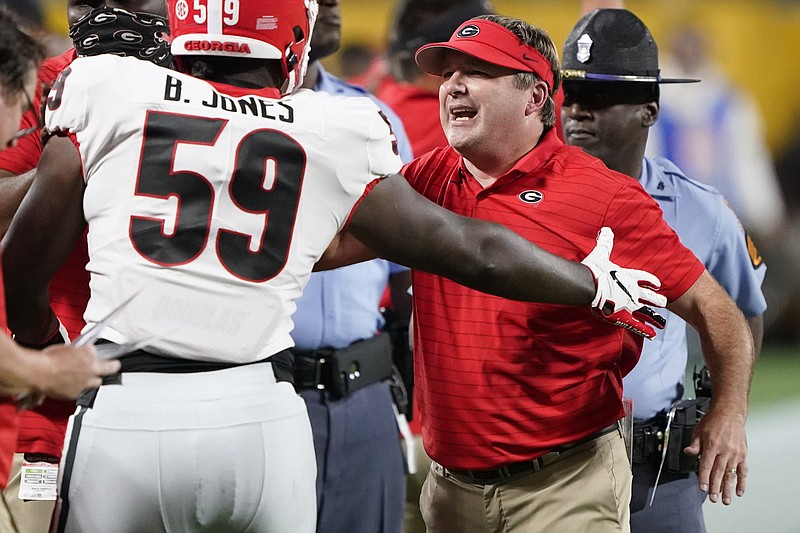 This weekend, while the Arkansas Razorbacks are getting a much-needed open date, the SEC will finish out October and then head down the stretch to the regular-season finish line.

Basically three quarters of the season are finished and it’s time to move to the finals, so here is one man’s opinion of what grades the programs have earned and what they need to to do to improve.

Starting with the best and ending with worst:

Georgia, A-plus. In going 7-0 and achieving the No. 1 ranking in the country, the Bulldogs have allowed only 46 points, the best in the league. That’s 83 fewer points than Texas A&M which is second in least points allowed. The Bulldogs just don’t need to beat themselves in closing out what could and should be a perfect season. Just keep on doing what they are doing.

Alabama, B-plus. The Crimson Tide are averaging almost 46 points per game, and while their defense is not as good as last year’s, it doesn’t have to be. The loss to the Aggies kept them from an A. After watching Nick Saban blow a gasket twice last Saturday over delay of game penalties coming out of a timeout, there is some concern for his health.

Ole Miss, B-plus. The Rebels’ defense is improving and their offense is run by an improved and wildly talented Matt Corral who is showing off his running ability this season. The NFL loves quarterbacks who can run the RPO. It won’t be easy, but if Ole Miss tends to its knitting, and head coach Lane Kiffin doesn’t say something controversial, the Rebels may be in line for the Sugar Bowl.

Kentucky, B-plus. This team is fearless, and if they can win the next two, the final three should be a prep for a major bowl game. To get to there they need to just keep running the ball and controlling the clock.

Texas A&M, B. The Aggies started too slow, but they did lose their starting quarterback. They didn’t take Arkansas seriously after beating them nine times in a row. They followed that loss up with one to Mississippi State, only to turn into the team they were supposed to be the entire season and beat Alabama. Big showdown coming with Ole Miss in Oxford next Saturday.

Arkansas, B. The Razorbacks have their first 5-3 start in five years. Their running attack is really good when the offensive line is healthy, and the passing game has been a very pleasant surprise. They have a tough road ahead and need to keep a balanced offense and hope everyone stays healthy.

Auburn and Mississippi State, B. That grade is for now, and they are being lumped together because both coaches, Bryan Harsin and Mike Leach, are openingly inviting distraction and controversy over their unwillingness to discuss if their teams are the required 85% vaccinated.

Tennessee, B. Yeah, yeah, lot of teams with good grades, but the Volunteers were thought to be forgotten after last season’s scandals and the hiring of another coach, but Josh Heupel has resurrected this team in short order. The Vols are dangerous and need just two wins to get bowl eligible.

Florida, C. Quarterback U it is no longer. The Gators are probably better than their 4-3 record but are inconsistent.

LSU, C. One of the most talented teams in the SEC but one controversy after the other keeps them from focusing. Most likely will not accept a bowl bid if they earn one.

Missouri, D. The Tigers have given up more points than they have scored and that’s never a winning formula.

Vanderbilt and South Carolina, F. Because there is no lower grade.