Lykes coming on at point guard in recent weeks 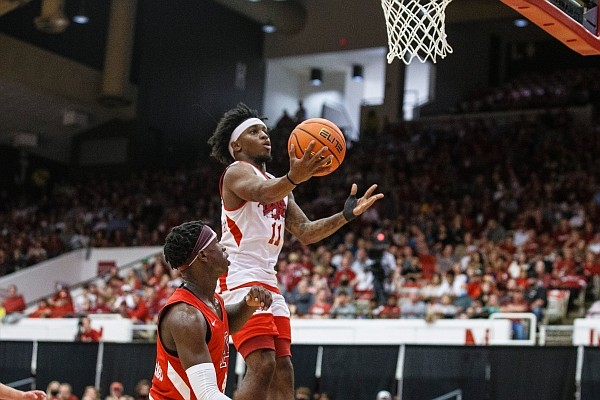 Arkansas guard Chris Lykes attempts a layup on Sunday, Oct. 17, 2021, during the second half of play at Barnhill Arena, Fayetteville.

FAYETTEVILLE — Chris Lykes has already experienced his share of ups and downs in his short time at Arkansas.

Considered one of the best players in the NCAA transfer portal this spring by a number of media outlets, he signed with the Razorbacks and was quickly met with high expectations. Many expected the ACC-tested guard to take hold of a starting job right away.

But his transition into a detail-oriented program that has offense-initiating players shoulder plenty of responsibility beyond scoring the basketball hasn’t been easy. Lykes fought an uphill battle for stretches of the offseason as he adjusted to Eric Musselman’s structured ways.

"The attention to detail is really new for Chris," Musselman said after the team's first preseason practice on Sept. 28. "I think he’s at his best when he’s just kind of balling or just playing. We’re going to need him to know the plays at the off guard and the point guard position.

"And we have a large play package, so that’s something that’ll continue to evolve for him. He’s not there right now understanding the third and fourth option at both those positions."

If Musselman’s assessment of the Miami transfer’s standing at the point guard spot at that juncture was a public challenge, Lykes met it head on and grew from it.

The Razorbacks’ third-year coach has witnessed great development in more than just Lykes’ knowledge of Arkansas’ system in recent weeks. And he expects the electric 5-7 playmaker to be one of his newcomers who best impacts winning.

“I think just the pace of practice maybe was different than what Chris was used to,” Musselman said Thursday. “I thought he was a pretty good practice player though most of the summer, but then I thought he jumped up the last three weeks to become one of our better practice players. He’s leapfrogged a lot of guys in terms of effort in practice.

“I think he’s picking up our schemes a little bit better maybe than he was throughout the summer session and early September. We have seen growth in his execution and also the pace he’s practiced with, as well.”

Lykes had a solid debut in the team’s Red-White Game, finishing with 14 points on 6 of 10 shooting and 3 assists. He was also a catalyst in Arkansas’ come-from-behind, 77-74 exhibition victory over East Central (Okla.) University last Sunday.

Lykes was a team-best plus-15 in his 27 minutes against the Tigers and added 13 points, 4 rebounds, 2 assists and 2 steals. The Razorbacks’ next highest plus/minus figure was JD Notae’s plus-6.

He finished 3 of 3 shots at the rim, 4 of 6 in the lane and knocked down 1 of 2 corner three-point attempts. His 4 in-the-paint scores were tied for second most on the team — Davonte Davis 8, Notae 4, Lykes 4.

Quality play from Lykes, whose role is still being ironed out this preseason, is central to the Razorbacks finding harmony in the backcourt. Musselman has said his group of point guards will be critical to any success Arkansas enjoys this season.

“He’s adapting really well, I can tell you that,” Davis said of Lykes on Thursday. “From when he first stepped on campus to now, his motor has changed, his demeanor of the game has changed. You could really tell if you were at practice. You can tell in a game, as well.

“He’s picking up 94 feet, getting steals and (doing) the small things like that that help the team out. And you know for sure that he’s a huge part of this team.”