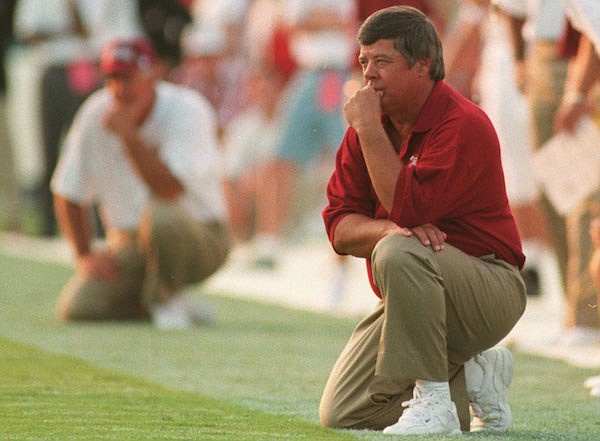 Arkansas defensive coordinator Joe Lee Dunn (right) kneels on the sideline during the Razorbacks’ game against SMU on Saturday, Sept. 2, 1995, in Dallas.

FAYETTEVILLE — Joe Lee Dunn, who as the University of Arkansas’ defensive coordinator helped the Razorbacks win the SEC West title in 1995, died earlier this week. He was 75.

Leaving Arkansas after one season for Mississippi State, Dunn said in a 1999 interview with the Arkansas Democrat-Gazette, was so his family could live closer to he and his wife’s parents in Columbus, Ga.

“We didn’t move because we didn’t like Fayetteville or anything like that, because the people there were really good to us,” Dunn said. “It was just one those things where it was a situation where we wanted to get closer to our folks so they could see their grandkids.”

Arkansas won its first SEC West title with Dunn’s help and Mississippi State won its only SEC West title in 1998 when he was on Coach Jackie Sherrill’s staff.

“Since 1995, Joe Lee has helped Arkansas and Mississippi State go to the SEC Championship Game,” Louis Campbell, a former Arkansas player who the Razorbacks’ defensive backs coach from 1990-97, said in 1999. “I think that says it all right there for his coaching ability.”

Georgia Coach Kirby Smart and LSU Coach Ed Orgeron said they didn’t know Dunn personally, but both have backgrounds as assistants on defense and knew about his contributions to the game.

“I remember as a player and a young coach, everybody talked about the blitzes and the pressures and his uncanny ability to call the defenses from the hip down on the field,” Smart said. “He hand-signaled and called them all himself.

“It was well known how aggressive he was in coming after people. I have a lot of respect for the work he did.”

Dunn was known for inventing the 3-3-5 defense and blitzing players from anywhere on any play.

“One of the pioneers of attacking defense,” Orgeron said. “Everywhere he went, man, he had a fantastic defense.”

Dunn was a Broyles Award finalist in 1999 as one of the nation’s top assistant coaches.

“It’s an absolute nightmare preparing for Joe Lee, because you never know what he’s going to do,” said then-Kentucky Coach Hal Mumme in 1999. “He’s one of the best there is in this business.”

Dunn finished his coaching career as Mumme’s defensive coordinator at New Mexico State in 2008 and McMurry from 2009-12.

“You might not see the same look twice,” Houston Nutt, the Razorbacks’ coach from 1998-2007, said about Dunn’s defenses. “But you know one thing. You know he’s going to blitz some time.”

Dunn said he liked the idea that opponents always were concerned about being blitzed.

“I think if you can give the offensive linemen something they haven’t seen before and that they try to block and it doesn’t work, then you really have a leg up on them,” Dunn said. “We really don’t blitz as much as everybody thinks we do, but if they think it, we might as well be doing it.

“As long as they think you’re doing all that kind of stuff, they’re probably eliminating some things from their offense that you’re not going to have to worry about.”

Dunn made a habit of coming to the office at 3:30 a.m. to start work so that after practice ended, he could go home and spend time with his wife and three children.

“I can get a lot of work done those first few hours I come in,” Dunn said. “There’s nobody else here, so I don’t have to worry about being bothered by anybody.”

A couple of weeks ago, Alabama Coach Nick Saban was asked on the SEC coaches’ teleconference about teams faking injuries by their defensive players to slow down the momentum of high-speed offenses.

“When players get tired they’re more susceptible to getting injured probably,” Saban said. “And you don’t have enough timeouts [to give players a break on defense] … so I understand why some people do it. We have not done it here.”

Saban was asked what could be done to stop teams from faking injuries.

“There’s a lot of good people out there who are above my pay grade,” Saban said. “I probably shouldn’t even be trying to answer this question.”

But nobody in college athletics is above Saban’s pay grade.

Saban again is the highest-paid college football coach at $9.753 million according to USA Today’s annual report released earlier this month.

Arkansas Coach Sam Pittman is No. 54 on the list at $2.925 million. His contract calls for a $3 million salary, but it was reduced by $75,000 because of athletic department budget cuts resulting from the coronavirus pandemic.

Here is a breakdown of where the other SEC coaches rank nationally:

USA Today didn’t report the salary for Vanderbilt Coach Clark Lea because he works at a private university that is not subject to open records requests.

Orgeron, who has been fired effective the end of the season but is continuing to coach the Tigers, will receive a buyout of $16.9 million.

Future SEC teams Oklahoma and Texas both have coaches with salaries in the top 15. Sooners Coach Lincoln Riley is No. 5 at $7.857 million and Longhorns Coach Steve Sarkisian is No. 14 at $5.45 million.

Kiffin was an assistant at USC from 2001-06 when the Trojans had three Heisman Trophy winners with quarterbacks Carson Palmer (2002) and Matt Leinart (2004) and running back Reggie Bush (2005).

When Alabama running back Derrick Henry won the Heisman Trophy in 2015, Kiffin was the Crimson Tide’s offensive coordinator.

Now Kiffin as a head coach has a Heisman Trophy candidate in quarterback Matt Corral, who has completed 141 of 208 passes (67.8%) for 1,914 yards and 15 touchdowns with 1 interception and has rushed 100 times for 474 yards and 9 touchdowns.

“Some of the other Heisman winners have had a lot of players around them where they didn’t have to carry the load as much as Matt has,” Kiffin said, noting some of the key offensive players who have missed games for Ole Miss because of injuries such as receiver Jonathan Mingo and running back Jerrion Ealy as well as some lineman. “One of the other Heisman favorites seems to have a long time to stand back there and wait for receivers to get open. Don’t get me wrong, he’s a great player too, but it’s a different deal with Matt.”

Kiffin didn’t mention Alabama quarterback Bryce Young by name, but that’s the “other” Heisman Trophy favorite he was talking about.

“Nothing for me,” Saban said Wednesday when asked on the SEC coaches’ teleconference what he’d like for his birthday. “I’m getting along fine. If there’s something out there I want, we usually just go get it. I can’t think of anything right now I really want.”

If you asked other SEC coaches what they’d like for a birthday present, Saban retiring likely would be at the top of their wish list.

But Saban is showing no signs of slowing down.

“I just kind of keep on keeping on, and I don’t have a timetable for anything,” Saban said. “The only thing that I’ve ever said is that if I felt like I was riding the program down or I wasn’t able to make a positive contribution to the program, then that would probably be time to let somebody else carry the torch.”

Saban said that when he was younger he never thought about what it would be like to still be coaching at 70.

“But I can tell you that I’m thankful every day and feel blessed that I have the opportunity to continue to be healthy and able to do this job without a lot of issues or problems,” he said. “I’m not really thinking a lot about what’s going to happen 10 years from now either because I try to focus on what’s happening now and try to take advantage of whatever opportunities that we have and do the best job that we can to be a good husband, granddad, father, coach.”

Florida often has been ranked going into its game against Georgia, but that’s not the case for Saturday’s game.

“This game is not about rankings. It’s never been about rankings,” said Kirby Smart, the coach of No. 1 Georgia. “It’s a rival game.

It may not be healthy for anyone to smoke — athletes in particular — but it’s traditional for Alabama’s players to light up victory cigars after a win over Tennessee.

The Crimson Tide players did it for the 15th consecutive year after their 52-24 victory over the Vols on Saturday night at Bryant-Denny Stadium.

Some of the Alabama players went back onto the field after the game to celebrate with fans, who also were smoking cigars.

“It was like a bonfire man,” Tide offensive tackle Evan Neal said Tuesday. “I almost got a headache.”

But Neal wasn’t complaining about the smoking.

“I enjoy the second-hand smoke, I’m not going to lie,” he said. “Get a little nicotine buzz before we got to smoke a cigar.”

Florida is playing against No. 1 teams in the same season for the first time.

The Gators play No. 1 Georgia on Saturday after losing to then-No. 1 Alabama 31-29 in the third game this season.

Alabama fell from No. 1 and Georgia rose to the top spot after Texas A&M beat the Crimson Tide 41-38 on Oct. 9.

Polk, a transfer from California, leads the SEC with 58 catches for 552 yards and 6 touchdowns in his first season with the Bulldogs.

For Mississippi State to have a shot to upset Kentucky on the road, Polk likely needs to have a big day catching the ball.

Polk’s top games this season have been against Memphis (11 catches for 135 yards) and Texas A&M (13 catches for 126 yards and 2 touchdowns).

As a freshman at Cal in 2019, Polk had 3 catches for 71 yards against Washington State when Mississippi State Coach Mike Leach was in his last season leading the Cougars.

The Florida-Georgia game usually takes top billing in the SEC for whichever week the Gators and Bulldogs meet, but with Florida struggling, Ole Miss (6-1) taking on Auburn (5-2) is the conference’s marquee matchup.

Both the Rebels and Tigers are looking to stay within striking distance of Alabama in the SEC West.

If either team wins out, it will win the West because of Texas A&M’s victory over the Crimson Tide.

The game could turn into a high-scoring shootout considering how well quarterbacks Matt Corral of Ole Miss and Bo Nix of Auburn have played this season.

6.6 — Points allowed per game by Georgia, which continues to lead the nation in scoring defense.

14 — Consecutive completions by Mississippi State quarterback Will Rogers in the Bulldogs’ 45-6 victory over Vanderbilt last week. He finished 41 for 57 for 384 yards and 4 touchdowns.

“Sometimes you just need to talk about things, and Bryce is always really receptive to that because he’s one of those guys that’s never defensive about any corrections because he really takes it like you’d like people to in terms of trying to use that experience, that failure even, as an opportunity to grow and get better.”

— Mississippi State Coach Mike Leach when asked if he keeps up with English soccer teams.

“We will have a quarterback on the field.”

— Florida Coach Dan Mullen, being coy about whether Emory Jones or Anthony Jones will start for the Gators against Georgia.