Owls are overlooked, even in their own city 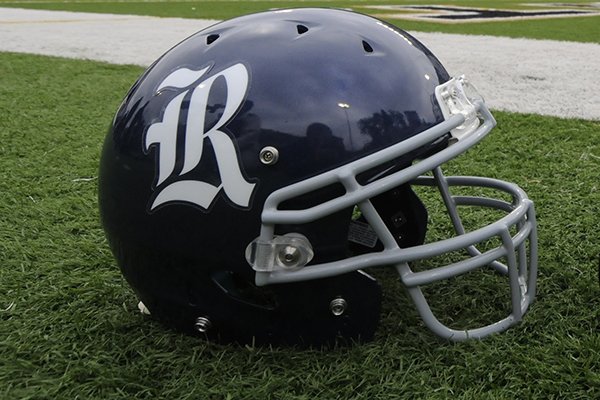 A Rice helmet sits near the end zone during the second half of of an NCAA college football game on Saturday, Oct. 11, 2014, in West Point, N.Y. (AP Photo/Hans Pennink)

In the heart of Houston, the fourth-largest city in the U.S. with almost 2.4 million people, sits an academic giant with less-than-glamorous sports programs in Rice University.

Houston, a sprawling concrete jungle of freeways and strip malls, is a professional sports city. It is all about the Astros, Rockets and Texans.

Tuesday’s online edition of the Houston Chronicle had six stories about college football.

Not a single one was about Rice.

LSU moving its practices to NRG Stadium in Houston got more ink than the Owls.

It wasn’t always this way.

From 2012-14, the Owls actually had winning records and went to minor bowls.

They were competitive during Ken Hatfield’s stay from 1994-2005, and back in the late 1940s and 1950s they played in three Cotton Bowls, and the Sugar and Orange Bowls.

Not saying the end of Rice was when it was left behind when the old Southwest Conference merged with the Big 8, but the Owls have had 17 losing seasons since 1996.

Current Coach Mike Bloomgren is 7-23, but if he’s graduating his players and sending doctors, lawyers and engineers out into the world, then he’s probably not on the hot seat.

Rice, like a handful of schools, is all about academics. It ranks No. 21 in the nation academically, according to Forbes magazine.

But last year the Owls went to then undefeated and No. 15 Marshall and won 20-0. They finished 2-3, but some insiders say Rice may be under the radar this season.

They return 17 starters, including 10 on defense. The Owls return 89 lettermen overall.

A starting quarterback has not been named, but one of those in the battle is Luke McCaffrey, who used the transfer portal to get out of Nebraska.

He is Christian McCaffrey’s younger brother and is a dual-threat quarterback. He was a four-star recruit and the No. 1 player in Colorado in high school.

He originally announced he was transferring to Louisville but switched to Rice without mentioning academics (his brother played at Stanford).

If he isn’t the starter, whoever beats him out was better. But if he doesn’t start, he probably will play.

Arkansas is favored by almost 20 points, but the Razorbacks have several key players hobbled. No one knows whether they will be available Saturday.

In the old days coaches would try to throw opponents off by saying starters were out, but it was visible in Sam Pittman’s face when he talked about having too many guys in green (no-contact) jerseys that he is seriously concerned.

The heat — and it is going to be hotter than a Phoenix cookout — won’t be a factor for the Owls. It doesn’t get much hotter and humid than Houston.

The game isn’t sold out, but there will be a hearty crowd, most of whom missed last season because of seating restrictions due to the coronavirus pandemic.

Rice will be aggressive, especially on defense, and try to get to Arkansas quarterback KJ Jefferson and rattle him a little.

The Owls will not be looking ahead, although their next two games are also against former SWC opponents and probably their two biggest rivals, Houston and Texas.

No doubt they have a tough start, but look for the Owls to be ready when they start Conference USA play.

Rice is a great school in a huge city. While football is not an afterthought, it has never been called a football factory, and the game against Arkansas most likely will not be reported in the Houston Chronicle.