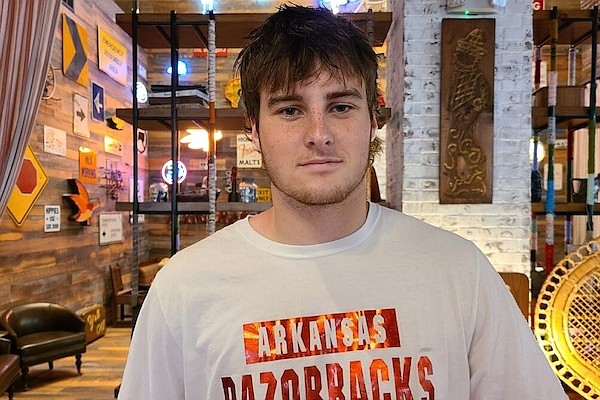 As an Arkansas deep snapper commit who will be on scholarship, Eli Stein had a little different focus than many of the other Razorback pledges on hand during Saturday’s 40-21 win over No. 15 Texas.

"The atmosphere was nothing like I had ever seen before," Stein said.

"It was crazy and it was by far the best time I have ever had a football game."

"The special teams was a game changer in last night's game. Without Cam's four field goals, it would have been a one-score game and that's a little too close for comfort."

It led to a win that Stein said solidified his feelings about coming to Arkansas.

"It was great,” Stein said. “I had a lot of fun. I don't think anything else or any other game could have represented Arkansas football. It just reaffirmed my decision. I'm more than happy to be a Razorback."

Stein is rated No. 3 with Rubio Long Snapping and No. 4 with Kohl’s Snapping and has been selected to play in the US Army All-American Game on Jan. 8 in San Antonio, Texas.

A highlight of the visit was getting to be in the locker room as the Razorbacks celebrated their fifth win in its their last seven games against the Longhorns.

“That was awesome," he said. "Just being back there with all the guys, that was really cool."

Little was Stein’s host on his official visit this weekend. He also spent time with Silver, a senior who he will be tasked with replacing next season.

“I've talked to him before on visits,” Stein said of Silver. “Really cool guy, so that was awesome."

Stein is proud to be an Arkansas commit living in Wisconsin and was on the phone with some friends on Saturday after the victory.

"It was great,” Stein said. “I've been talking to Badger fans. It seems like Arkansas fans are really happy about that Texas win. That was huge."

Seeing a full stadium was just another facet of Arkansas' facilities that Stein is enamored by.

"They're unreal. Every time I see them it blows me away," he said. "There isn't a second of doubt that I chose the wrong school. It's fantastic here."