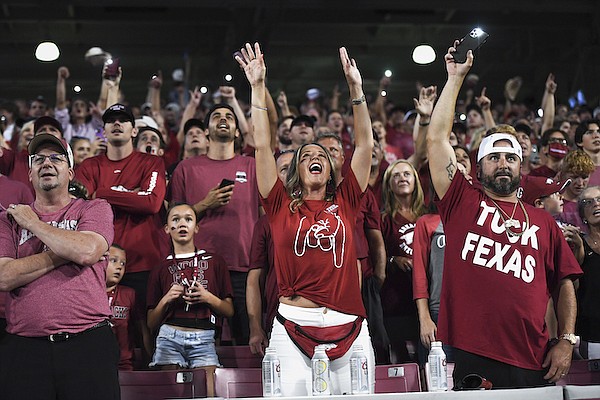 Arkansas fans are shown during a game against Texas on Saturday, Sept. 11, 2021, in Fayetteville.

FAYETTEVILLE — Arkansas’ play and the atmosphere during the Razorbacks' 40-21 victory over Texas impressed several recruits in attendance Saturday.

The more than 74.000 fans were vocal and the prospects took notice.

“The fans were top notch, loud after ever single catch, big run, anything,” said Wingo, who has been offered by Arkansas. “I liked that the most of all.”

“I was really impressed on both sides of the ball,” he said. “You could tell they wanted to make a statement about SEC ball and I love that about Arkansas. The atmosphere was the best I’ve ever seen, and just hanging with other recruits was fun also.”

Bentonville junior offensive lineman Joey Su’a, 6-4, 319, received an offer from the Razorbacks on July 31. He attended the Rice and Texas games.

“Awesome experience,” he said of the Texas game. “The Razorback fans are the most passionate fans I’ve ever seen. Coach (Sam) Pittman had the Hogs prepared and ready to beat Texas.”

Junior receiver Micah Tease, 5-11, 170, of Tulsa Washington visited for the game after recently receiving an offer from the Razorbacks.

“It was great,” Tease said. “I ended up meeting (former Razorback player and Dallas Cowboys owner) Jerry Jones. The staff was very polite and the atmosphere was just amazing. I enjoyed coming down.”

Sophomore receiver Parker Livingstone, 6-4, 185, of Lucas, Texas, visited Fayetteville in June and he loved his return trip for the game against the Longhorns.

“Oh man, it was amazing, great place, great coaches and a great atmosphere,” said Livingstone, who has an Arkansas offer. “Loved it, every second of it. It was amazing (from) the pregame to the postgame. Will definitely be making a return back to Fayetteville.”

ESPN 4-star quarterback Avery Johnson, 6-3, 180 of Maize, Kansas attended an Arkansas camp during the summer and made return trip to Fayetteville for the Texas game.

"I had a great time," he said. "The game was very exciting from start to finish. Arkansas was very dominant on both sides of the ball and the atmosphere was like no other. Fayetteville was one to remember."

Sophomore linebacker Payton Pierce, 6-2, 225 pounds, of Lucas, (Texas) Lovejoy has offers from Arkansas, Missouri, Virginia Tech and Tulsa. His visit for the Texas game was his second to Fayetteville since June.

"The game was absolutely unreal, the coaches and staff were unbelievable welcoming," Pierce said. "The whole team from both sides of the ball played hard, extremely tough and we’re very well coached. I could really see myself playing here."