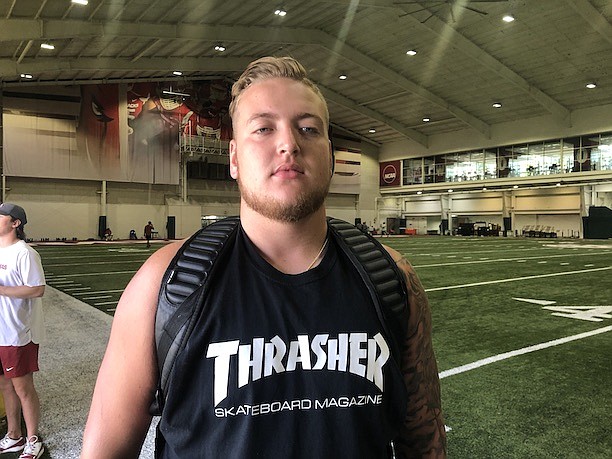 “It was exactly what we thought they were going to do,” said Henderson, who was one of four official visitors at the game. “Pittman has done a really good job of not guessing or being a guy that thinks they can be good — he knows. He told me before the game, 'We’re going to win,' and I knew we were. I wasn’t worried. I just thought it was going to be be a fun time afterward and it was. "

The environment around Fayetteville was impressive to Henderson.

“The city was electric,” he said. “I haven’t really got to see a game here, so I think I picked a really good one to come to.”

Henderson, 6-4, 290 pounds, of Duncan (S.C.) Byrnes pledged to the Razorbacks in August 2020. He pays attention to his position group when watching a game and liked what he saw from center Ricky Stromberg and the guards.

“I’m watching a lot of the centers,” Henderson said. “I’m usually watching the interior three guys. I’m looking at the box a lot and I think we controlled the box really, really well getting the linebackers and not letting the leakage get through. When you’re a recruit or a top guy, you’re there for a reason, so you’re kind of watching everything and from an analytical standpoint, too, it’s real fun.”

ESPN rates Henderson a 3-star prospect and the No. 5 center in the nation for the 2022 class.

“I was telling some of the other recruits…in five or six years when people ask you, ‘What was your official visit?’ and you say, 'Texas game,' they’re going to be like, 'Oh that was a good one,’ you know?" said Henderson, who was hosted by freshman offensive lineman Terry Wells. “It’s definitely going to go down in the history books. I’m glad I was a part of it.

“Seeing the fans rush the field and everything, it’s one of those storybook games you see online or on TV and you’re like, 'Man I wish I could’ve went.' Well, you’ve got to go now, so, I’m excited. I’m glad we got to go and I’m glad that my family got to experience it. I’m just ready to get on the field.”