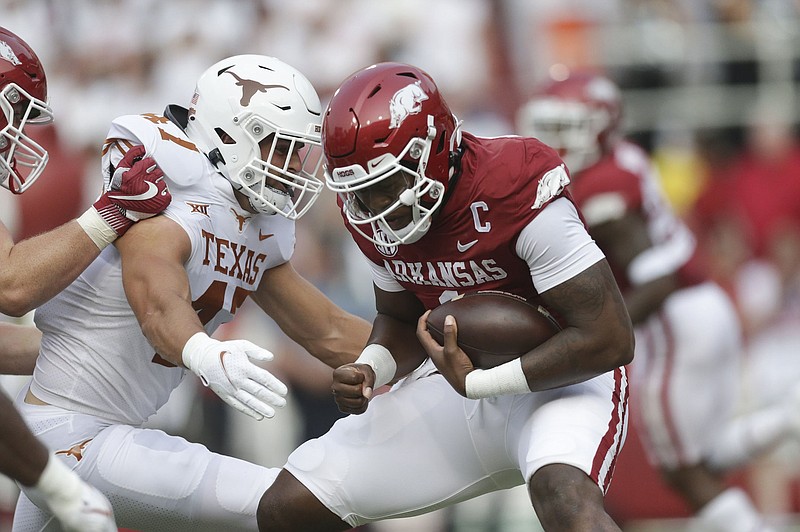 Editor's Note: Arkansas Democrat-Gazette reporter Tom Murphy is one of 63 voters in The Associated Press Top 25 football poll, and the only voter from the state of Arkansas. He explains his poll each week.

Did I rank the Arkansas Razorbacks? Yes.

Snuff a top-15 team as handily as the Razorbacks disposed of No. 15 Texas in a rivalry matchup and you reap the benefits of some poll votes. That 40-21 final could’ve been even more lopsided if not for Texas’ red zone defense.

Arkansas was one of three newcomers in my poll, along with Pittsburgh and Michigan, who are all 2-0. I’d rather rank 2-0 teams in the final segment of the poll than 1-1 teams, but I do have 1-1 Wisconsin, Iowa State and North Carolina among the final six spots this week.

SEC powers Alabama and Georgia remained solid in the first two slots on my ballot after overpowering performances. Oklahoma jumped up to No. 3 after shaking off its uneven performance against Tulane with a blasting of Western Carolina.

Oregon didn’t look super smooth in its opener, either, and look what the Ducks did. Their 35-28 upset on the road at Ohio State meant a jump to No 6 for me, and the thought of ranking the Ducks even higher, and a fall to No. 12 for the Buckeyes.

I think there’s a lot of proving to do for the rest of the top 10, including Clemson, which notched a blowout win after its defensive slugfest against Georgia and is No. 7 on my ballot. The same could be said for Cincinnati and Florida, which have been cruising against over-manned opponents.

Iowa’s road win at Iowa State meant a spot at No. 8. Texas A&M clearly has some offensive issues, so the Aggies’ skin-of-their-teeth win at Colorado led to a fall to No. 9.

What is going on with Notre Dame? Now that Florida State has also fallen to Jacksonville State, perhaps that cheapens the Irish’s overtime win in Tallahassee? Notre Dame edged Akron on Saturday but has greater challenges ahead.

Stanford also thumped a top-15 team in No. 14 Southern Cal, on the road no less, but the Cardinal lost in Week 1, so they have a little more work to do to make my ballot.

Also in strong consideration for me: TCU, UCF, Michigan State, Boston College, Virginia, Baylor, Liberty, Nevada and a few others.