Razorbacks could be down 2 linemen for Southwest Classic 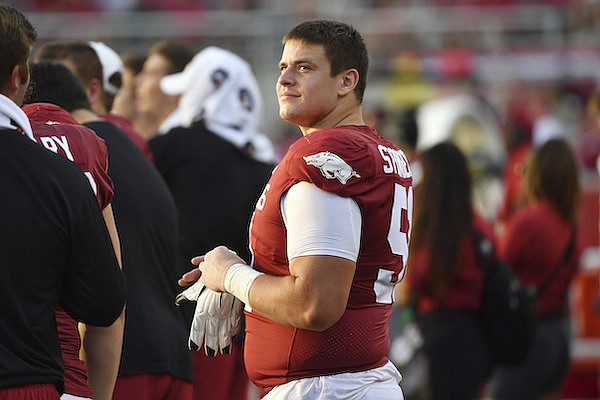 Arkansas center Ricky Stromberg (51) on the sidelines against Georgia Southern during the second half of an NCAA college football game Saturday, Sept. 18, 2021, in Fayetteville. (AP Photo/Michael Woods)

FAYETTEVILLE — Arkansas coach Sam Pittman said his team will prepare for the game against No. 7 Texas A&M on Saturday as if two starting offensive linemen won’t be available.

Pittman did not rule out center Ricky Stromberg or right tackle Dalton Wagner for the game, but said neither will practice Monday.

Wagner left the Razorbacks’ 45-10 victory over Georgia Southern in the first quarter with an undisclosed injury. Stromberg, who earned the SEC’s co-offensive lineman of the week award Monday, appeared to injure his left leg when running back Trelon Smith was tackled into him in the third quarter.

“I’ll probably know more Wednesday,” Pittman said. “I’m positive neither one of them will practice today.

“I told (offensive line coach Cody) Kennedy we better get ready as if neither one of them will be ready to play. That’s what we’re going to do.”

Pittman said he was proud of the job Kennedy and his line did adjusting for the absence of two starters. Arkansas’ starting offensive line without them would likely be Myron Cunningham at left tackle, Luke Jones at left guard, Ty Clary at center, Beaux Limmer at right guard and Brady Latham at right tackle.

“We’re going to go back to that mentality that all we got is all we need,” Pittman said. “If (Stromberg and Wagner) can play, we sure as heck want them to, but we’re going to be prepared if they’re not able to.”

Pittman addressed other injuries during his Monday meeting with reporters.

He said tight end Hudson Henry was limited against Georgia Southern because he rolled his ankle last week and was held out of practice until Thursday. Henry played nine snaps during the game.

“He had rolled his ankle and he hadn’t practiced,” Pittman said, “and we’ve already proven that if you don’t practice, you’re probably not going to play very good.”

Pittman said Smith, the running back, has been battling a toe injury, and defensive back Myles Slusher is fully healthy after battling an injury to his hamstring or quadricep.