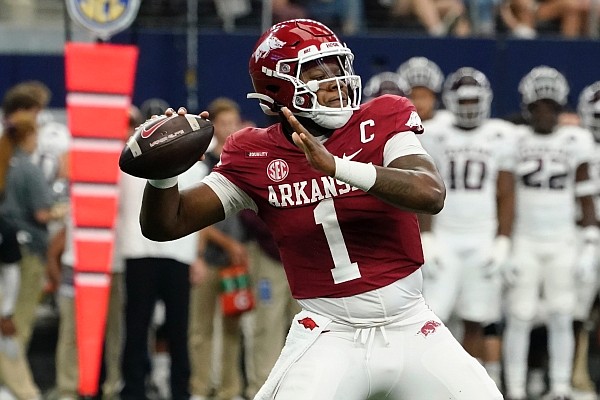 Arkansas quarterback KJ Jefferson throws a long pass for a touchdown in the first half of an NCAA college football game against Texas A&M in Arlington, Texas, Saturday, Sept. 25, 2021. (AP Photo/Tony Gutierrez)

FAYETTEVILLE — As the understudy to Feleipe Franks in 2020, KJ Jefferson watched the Florida transfer find great success in the vertical passing game.

Franks, who is now the Atlanta Falcons’ backup quarterback, was one of college football’s most accurate deep-ball passers in his lone season at Arkansas, completing 21 of 36 throws that traveled 16-plus yards downfield. They amounted to 851 yards and eight touchdowns.

As it turns out, Jefferson may have picked up tips and tricks from Franks on more than just being a leader and instilling belief in teammates. Jefferson, too, in his time as a starter, has been effective stretching the field with the pass.

Movin' on down the field

Arkansas quarterback KJ Jefferson is 12 of 17 passing for 414 yards and 2 touchdowns on throws 16-plus yards at depth this season.

A breakdown of those passes by target:

Through four starts in 2021, the redshirt sophomore has connected on 12 of 17 deep throws for 414 yards and a pair of scores.

“I don’t know what you credit the accuracy on long balls to,” said Sam Pittman, who as an aside Monday mentioned he also played quarterback in seventh grade. “Here’s what I do know: you put enough air under it and we’ve got guys that can go get it.

“If you win off the ball and you put enough air under it, we’ve got guys that will go get it. We practice it a lot.”

Arkansas has opened up its downfield passing attack in its last two games against Georgia Southern and Texas A&M. Jefferson attempted only four passes 16 or more yards at depth in the first two weeks of the season, completing each of them for a net of 112 yards.

He is 8 of 13 on such throws in his two most recent outings for 302 yards and two touchdowns, one a 60-yard dime to Warren Thompson in Week 3 and the other an 85-yarder to star receiver Treylon Burks last Saturday.

Unsurprisingly, Burks has been Jefferson’s top option on deep throws, targeting him eight times. Their five connections have picked up an average of 34.6 yards. And just behind Burks is Tyson Morris, who appears to be on his way to a career year in his final college season.

Jefferson has hit the mark on all four attempts for Morris, totaling 144 yards on the plays, which include two 45-plus yard gains. Against Texas A&M, Morris had only one reception, but it went for 21 yards on a well-executed back-shoulder throw along the Arkansas sideline.

“I think it’s very important,” Pittman said of Jefferson’s downfield accuracy. “I think there are a lot of things that KJ does that are very important. One of them is throwing the football and having a threat to get people out of the box.”

Forty-nine percent of Jefferson’s 844 passing yards have come by way of the deep ball. Those throws have in turn forced defenses to play the Razorbacks honest and created opportunities in the running game for Jefferson and a host of talented backs.

Entering the stiffest challenge of his career this weekend against No. 2 Georgia and a defense that is first nationally in scoring defense (5.8 points) and total defense (181.8 yards per game), Jefferson is the lone SEC quarterback with more than 800 passing yards and 200 rushing yards this season.

The Bulldogs have allowed six passing plays resulting in gains of 20-29 yards and five between 30-39 yards over four games.

Pittman on Monday voiced confidence and belief in Jefferson's ability as the quarterback prepares for the first top-10 matchup of his career.

“For us and what we do, he’s perfect for what we’re asking our quarterbacks to do,” Pittman said.