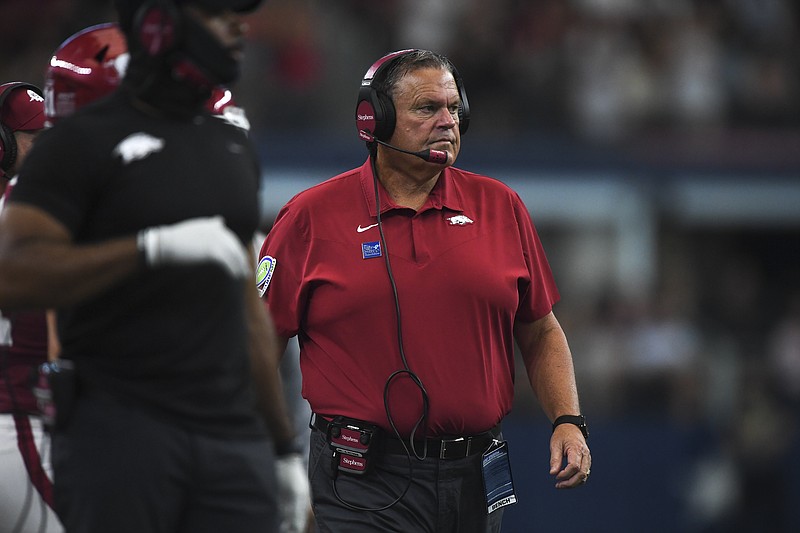 • Pittman said he is looking forward to going back to Athens, Ga. He said his memories are fond of the city and Georgia coach Kirby Smart.

• Quarterback KJ Jefferson and receiver Treylon Burks are sore, Pittman said, but he thinks both will be fine for Saturday's game. He said he doesn't know if either will be able to go full speed in Monday's practice.

• Pittman said the "super seniors" and transfers have played a significant role in the team's quick turnaround. He said the team hit it big on John Ridgeway. "We knew about his size and athletic ability, but we didn't know about his heart."

• Pittman credited the talent and depth in Georgia's front seven. "Hopefully Arkansas gets that point here in the near future."

• On Arkansas playing in front of a full-capacity venue on the road, Pittman said traveling to Dallas for the Texas A&M game helped. He said that trip was the first time to fly for some of the freshmen. "Those things I think we're prepared for. The crowd is going to be incredible there. It's 'College GameDay.' Last week helped us a little bit because half the crowd was against us. We know we'll get 93,000 there against us."

• Pittman said he learned a lot from working for Kirby Smart, including practice organization, being demanding of assistant coaches and recruiting. "All he wants to do is win. He treats people right, but he's at his alma mater and he wants to win for the state of Georgia and University of Georgia."

• Pittman said one of KJ Jefferson's assets is his ability to throw a deep ball well, along with his ability to run. "For us and what we ask him to do, he's perfect for what we do."

• Pittman was asked about leaving Arkansas for Georgia in 2015 and said he didn't want to talk much about the decision. He said he was attracted to Georgia because it won a national championship the year he graduated high school. "Georgia had this program that was an elite program and part of me thought I would like to experience those things."

• Pittman said he thinks it is difficult to prepare for Barry Odom's defense because of the multiplicity. "You can waste some reps because you're not sure" what defense the Razorbacks will run, Pittman said.

• Pittman said he is concerned about the heat in practice this week. He said the indoor facility is not air conditioned, but they are going to practice inside to get the team out of the sun.

• On the play of Malik Hornsby against Texas A&M, Pittman said it was beneficial for him to get into a game of that magnitude. He said the team needs to be able to throw the ball when Hornsby is in the game. "Instead of having a package for him, we've got to run our offense."

• Pittman indicated Dominique Johnson needs to play more. He said there was no indication to hold him back in the second half. He said Rocket Sanders did not play when Hornsby was the quarterback because those two have had some handoff exchange issues in practice.

• On being ranked eighth, Pittman said he is happy. "I'd rather be eighth than 80th."

• Georgia QB JT Daniels did not play at Arkansas last season. Pittman said Daniels can pick a defense apart if he is given time. "He can throw the ball, the intermediate, he can thrown on the run."

• On praising players more than yelling at them in practice, Pittman said, "I don't think you can reach your full potential out of fear....If I believe that coach has confidence in me, I can at least go try at my highest level to complete that task. I also believe that if someone brags on you and they hear it, they want the same thing."

• Pittman said he has noticed an uptick in interest from recruits since the Texas and Texas A&M wins. "It's an exciting time to recruit to the University of Arkansas."