Pittman believes Jefferson, Burks 'will be fine' for Georgia game 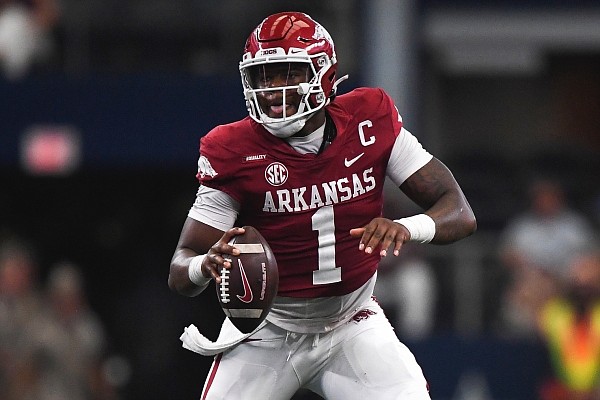 Arkansas quarterback KJ Jefferson (1) looks to pass, Saturday, September 25, 2021 during the second quarter of a football game at AT&T Stadium in Arlington, Texas.

FAYETTEVILLE — The availability outlook for two of No. 8 Arkansas’ most important pieces is positive ahead of Saturday’s road game against No. 2 Georgia.

Starting quarterback KJ Jefferson and star receiver Treylon Burks each sustained injuries and were forced to exit last Saturday’s 20-10 victory over Texas A&M at various points in the game. But Razorbacks coach Sam Pittman expects both players to be ready for the team’s first true road game.

“(Jefferson is) sore. Treylon's sore,” Pittman said. “Obviously, we've played some good football teams and physical games. I think both of them will be fine.”

Jefferson, who finished 7 of 15 passing for 212 yards and 2 touchdowns in Arkansas’ fourth win of the season, injured his left knee early in the second half against the Aggies.

He returned midway through the fourth quarter, completing one pass for 10 yards and rushing three times for 19 yards. He clinched the game with a 10-yard first-down run.

The SEC co-offensive player of the week, Burks had a team-high 6 catches for 167 yards and 1 touchdown in the game. He was helped off the field by members of Arkansas’ training staff in the fourth quarter as he dealt with a foot injury.

Burks later appeared at his postgame press conference with a walking boot on his right foot, adding he had a “slight little injury.”

“They may or may not be able to go full speed today,” Pittman said, “but I don't think it will be a problem for the game.”