Arkansas-Kentucky basketball game will return to CBS in '22 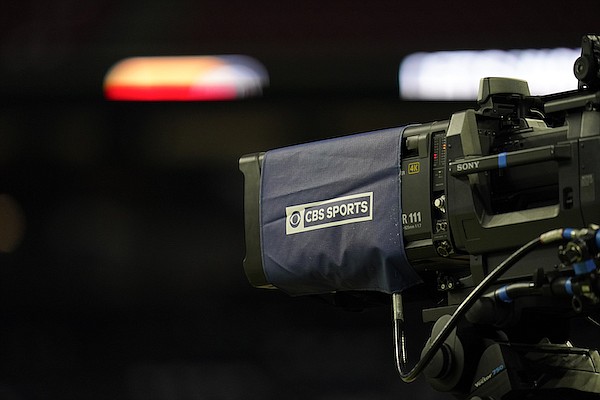 The CBS sports logo is seen on a television camera cover in this 2020 file photo. (AP Photo/Matt Patterson)

FAYETTEVILLE — For the first time in seven years, the Arkansas-Kentucky basketball game will return to CBS during the 2021-22 season.

The Saturday, Feb. 26 game between the Razorbacks and Wildcats is scheduled to tip off at 1 p.m. Central at Bud Walton Arena, according to the SEC’s TV schedule that was released Thursday.

It will be Arkansas’ only game on CBS in the upcoming conference season. The network will show three other Kentucky games during the conference season — at Auburn on Jan. 22, at home against Alabama on Feb. 19 and at Florida on March 5.

CBS will show six SEC games during the regular season.

Arkansas and Kentucky have played on CBS 15 times dating to 1994-95, when the No. 9 Razorbacks defeated the No. 5 Wildcats 94-92 in Fayetteville on Super Bowl Sunday. That was the first of eight consecutive seasons that CBS picked up the matchup.

Fourteen of their games on CBS have come during the regular season. They also played on the network in the championship game of the 1999 SEC Tournament in Atlanta, won by Kentucky, 76-63.

Arkansas was a regular on CBS — which has held the rights to the NCAA Tournament for four decades — during the 1980s, 1990s and early 2000s, but its appearances on the network have become scarce. Earlier this year the network came to Fayetteville for a basketball game for the first time in seven years.

Including postseason games, the Razorbacks have played on CBS 88 times. In November 1981, Arkansas defeated Michigan 83-72 at Barnhill Arena in the first basketball game ever shown on the network.

Arkansas’ other 17 conference games will be shown on an ESPN affiliate, including nine games on SEC Network. Eight of the Razorbacks’ games will be televised by ESPN, ESPN2 or ESPNU, but final determinations will not be made until closer to game time.

At least six of Arkansas’ nonconference games have been chosen by a TV network. Other games are likely to be added closer to the season, and some might be shown only on a digital platform such as SEC Network-Plus or ESPN-Plus.