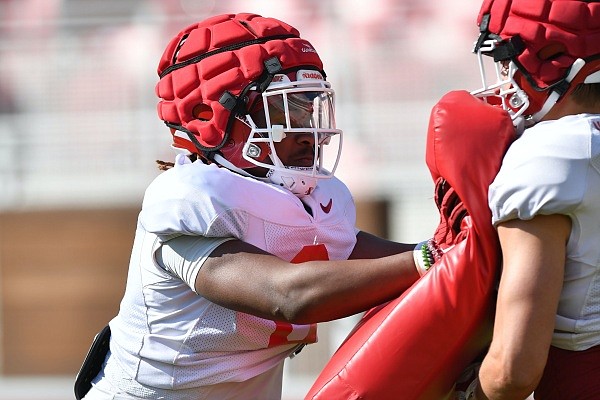 FAYETTEVILLE — Since returning from a 12-day layoff for spring break, Arkansas has not had the services of one of its projected playmakers at tight end, but the group is pushing on.

Trey Knox, who moved from receiver to tight end last season, has missed the team’s workouts due to a concussion sustained in a car accident during the break. Razorbacks Coach Sam Pittman said Tuesday that Knox was not quite himself yet.

He was unsure when Knox would make a return to the practice field.

“He’s done a great job,” Briles said. “He’s played with our ones a bunch and he’s been one of those guys that if guys were to get injured in practice, you’d plug him in … and you really don’t miss a beat. He doesn’t look flashy or look like he’s a great player, but he doesn’t mess things up either.

"He can get out there and process information quickly and be right.”

Blake Kern, who returned in 2021 for his super senior season, led Razorbacks tight ends with 15 catches for 183 yards and 2 touchdowns. Knox had 1 touchdown and 141 yards on 20 receptions.

Henry, a redshirt junior, caught four passes for 27 yards and is hopeful for a breakout season after arriving on campus as the No. 1 tight end in the nation out of Pulaski Academy in Little Rock.

“We’ve got maybe seven guys that are all mid-terms that have come in and it’s great to have all those guys at practice,” Briles said. “I like the freshman that we just got here, a young kid Tyrus Washington from Georgia. He’s done a nice job as well.

“Hudson has done a really nice job, and Bax, and Tyrus has done a nice job as well.”

Quarterback KJ Jefferson and linebacker Bumper Pool, two of the team’s top leaders on each side of the ball, provided a moment for their Arkansas teammates to emulate late in Saturday’s workout.

As Jefferson ran a quarterback draw, Pool came charging up to “tag off” on the off-limits quarterback. The two managed to collide with their upper bodies with more force than is usual, leading to a split-second mock standoff in which it appeared both players were hamming it up.

Moments later, the pair met behind the line of scrimmage as a different group of players ran the live action to assure each other that everything was cool.

The UA held a reception for around 350 people Saturday inside the expansive north stadium complex of the Broyles Athletic Center and Reynolds Razorback Stadium to dedicate the training rooms at the stadium and the Fred Smith Football Center to long-time trainers Dean Weber and Bill “Groundhog” Ferrell.

The rooms will now be known as the Weber-Ferrell Athletic Training Room.

Weber, the head athletic trainer for Arkansas football from 1973-2008, now works for the Razorback Foundation.

About 25 members of the Ferrell family were on hand Saturday for the reception to honor Ferrell, a UA trainer from 1950-67.

Henderson appeared to hold up well physically, but he did have a muffed exchange with quarterback KJ Jefferson early in the workout.

Additionally, Ty’Kieast Crawford took first-team reps at right tackle as Dalton Wagner is allowed time to recover from a mild back issue.

Cornerback Dwight McGlothern, who has been working opposite Hudson Clark with the starters the past several practices, tweaked something in his leg and spent part of practice stretching on the sideline.

Malik Chavis moved up with the starters at corner and picked off a pass from Malik Hornsby on the left sideline when Hornsby took some reps with the starting unit.

Earlier, Hornsby had motioned into the quarterback spot during red zone work and hit the right edge for a 12-yard touchdown run.

Both sophomore Cam Little and transfer senior Jake Bates went 3 for 4 on field goal attempts at the end of Saturday’s workout, and each nailed his longest try, a 51-yarder.

Both kickers missed their 44-yard try from the left hash. Little put his kick off the left upright and the carom went in front of the crossbar and down. Bates’ 44-yarder was pulled far left.