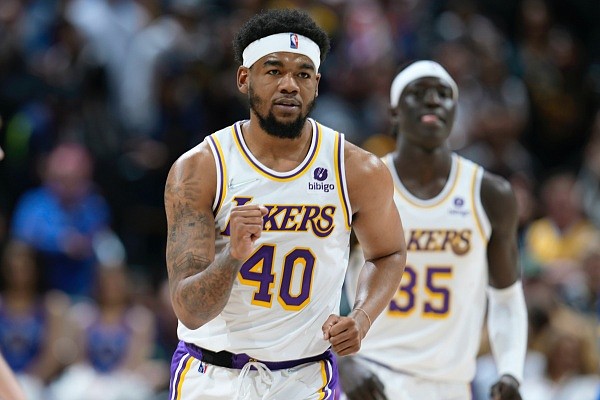 The Los Angeles Lakers’ 2021-22 season went the way few expected it would in the preseason.

But by the end, as a number of the Lakers’ high-profile names watched on, a standout at Arkansas early in Eric Musselman’s tenure used the team’s final games to showcase his ability under the bright lights.

While Mason Jones fielded questions from reporters Monday, it was clear he is ready for his next challenge. He also expressed how thankful he was simply for the opportunity to display his game on a grand stage following countless hours of work and games in the NBA G League.

“It was kind of big, because I feel like now going into next year it’s really going to pay off knowing that the year I had in the G League and the experience and growth that I had, it really pays off,” Jones said during the Lakers’ exit interviews Monday. “Some people look at the G League as not a good experience or just being down there and not being grateful for it.

"It really paid off the two games I was able to play. You could see that experience.”

Los Angeles’ final two games were against Oklahoma City and Denver, and Jones put up 13 points and 9 points, respectively, in a combined 41:46 in the lineup, helping the Lakers grab a pair of wins. He made all four of his field goal attempts in the 19-point victory over the Thunder, including three and-1s and a transition three-pointer.

In the regular-season finale, Jones pitched in 5 rebounds, 3 assists and 1 steal. The Lakers were plus-6 in his 23:36 on the floor and won by five points.

The day prior to his 13-point outing, Jones led the South Bay Lakers with 33 points in a 112-110 season-ending loss in the G League playoffs. Frank Vogel, fired by the Lakers on Monday, expressed excitement April 8 about Jones’ two-day run.

“He was coming in exhausted today,” he said of Jones. “We threw him out there and he played really well. He showed all the hustle and fight. That’s what these guys’ basketball journeys is all about, opportunities like tonight.

“There is a lot of joy in that, and I was really happy for him to have the night that he had.”

On multiple occasions Monday, Jones mentioned the value of his experience with South Bay, noting he had “all the time in the world” to improve and work on his game. He finished third in G League MVP voting.

Jones agreed when asked if he believes he can follow a career path similar to that of Alex Caruso, who shined in the minor league system before finding his place in the NBA.

Last August, he signed a four-year, $37 million deal with the Chicago Bulls.

The third-leading scorer in the G League last season at 25.5 points per game on 50.9% shooting and 40.8% from three, Jones said feedback from Los Angeles’ front office was positive. Continuing to work on his body was a point of emphasis.

“That was really it,” Jones said. “Just making sure I continue to get my body fat down, which is the next step in my goal for Year 3. Just knowing that was one of the biggest things, I was already working on that.

“I’m really excited for it and I’m ready to achieve that next goal.”