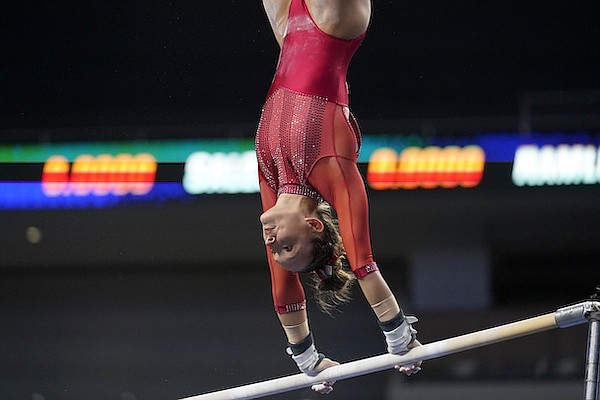 University of Arkansas senior Sarah Shaffer tied for 12th on the uneven parallel bars in the first session of the NCAA Gymnastics championships on Thursday afternoon.

Shaffer scored a 9.875 on the event on the first rotation of the day at Dickies Arena in Fort Worth while competing after the Alabama lineup. Shaffer, of Tyler, Texas, was tied with Alabama’s Luisa Blanco atop the bars leader board after one rotation. The trio of Oklahoma’s Audrey Davis, Oregon State’s Jade Carey and Minnesota’s Lexy Ramler tied for the bars title with matching 9.95s.

Arkansas senior Kennedy Hambrick posted a 39.325 to finish sixth of seven gymnasts in the all-around competition in the first session. Hambrick’s day peaked on the fourth rotation with her 9.8875 on the balance beam following a strong performance from her rotation companion, Utah.

The Pearland, Texas, native tied for 15th in the session on the bars. Hambrick, making her second appearance as an all-around performer at NCAAs, also scored 9.8625 on the vault and bars and 9.7125 on the floor exercise.

No. 1 Oklahoma won the afternoon session with a 198.1125.Oklahoma and Utah advanced to the NCAA finals, which will take place on Saturday at noon.