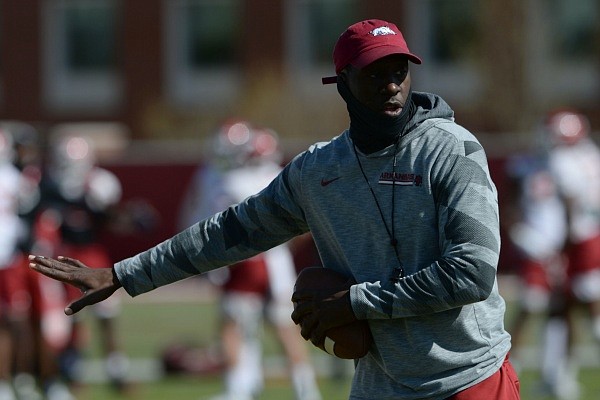 Arkansas assistant coach Jimmy Smith speaks to his position group on Thursday, April 8, 2021, during practice at the university practice facility in Fayetteville. Visit nwaonline.com/210409Daily/ for the photo gallery.

Four-star running back Dante Dowdell has made numerous college visits, and his trip to Arkansas stacks up well with the others.

He made trips to Ole Miss, Alabama, Louisville, Tennessee, Florida, Oregon and other programs.

“I liked the hospitality. I like Coach Smith. (He is) real down to earth, even the head coach,” said Dowdell, who reports a 335-pound bench press and 550-pound squat. “He’s an O-line coach, so he’s going to get the best offensive linemen and a running back. You want the best O-line in front of you.”

Knowing Pittman’s background as an offensive line coach interested him.

Dowdell said the meeting with Pittman was the highlight of the trip.

“I like the history behind him and his vision,” he said.

The 2021 MaxPreps Mississippi High School Football Player of the Year, Dowdell rushed 329 times for 2,554 yards and 28 touchdowns as a junior, leading for the Maroon Tide to 5A state title. He was named MVP of the championship game.

He believes Smith is a good developer of tailbacks.

“He’s a real dude,” said Dowdell, who indicated another visit to Arkansas was a possibility. “He seems like he knows how to develop his players to get to the league."