Mataio Soli commits to Hawaii out of portal 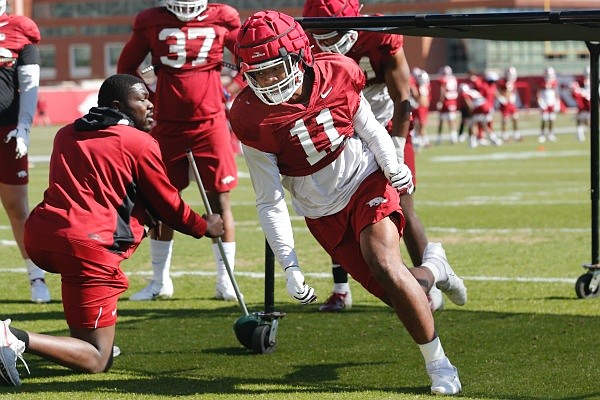 Mataio Soli participates in an agility drill during Arkansas spring football practice on Thursday, April 1, 2021, at the practice field on the campus in Fayetteville.

In a post to his Twitter account, Soli stated his commitment to Hawaii, a member of the Mountain West Conference. The son of Razorback great Junior Soli, he announced his intent to transfer from the Razorbacks on April 6.

Hawaii finished the 2021 season at 6-7 overall and 3-5 in conference games. The Rainbow Warriors allowed 31.4 points per game.

Soli, who ran with the third-team defense in practices he attended this spring, dealt with a number of injuries during his college career, including what appeared to be a minor leg injury in one of his final workouts in April.

An 11-game starter with a broken bone in his hand as a true freshman in 2019 under position coach Steve Caldwell, Soli totaled a career-high 19 tackles, including 1.5 tackles for loss.

But playing time on defense was scarce the last couple of years. The 6-4, 241-pound end made 1 start the last 2 seasons and amassed 12 tackles, 1.5 tackles for loss and a half-sack in 21 games.

Soli’s biggest contribution in 2021 came on special teams with the recovery and four-yard return of a punt blocked by Jake Yurachek in the second quarter of Arkansas’ 40-21 win over then-No. 15 Texas.

Tom Murphy contributed to this report.