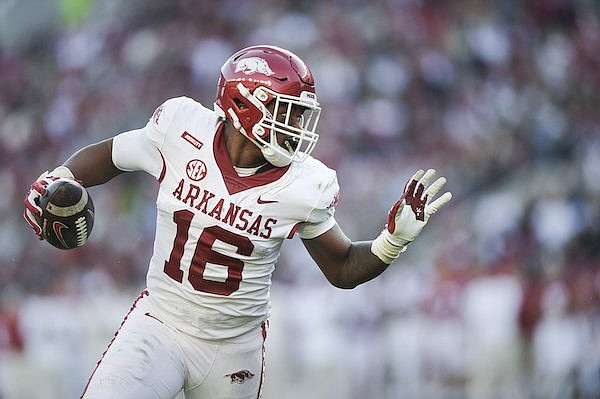 Arkansas receiver Treylon Burks runs for a touchdown during a game against Alabama on Saturday, Nov. 20, 2021, in Tuscaloosa, Ala.

At an early age, many who watched Treylon Burks move on a football field believed he would one day reach the NFL.

Thursday was that day.

Burks, arguably the best wide receiver to ever suit up for the Razorbacks, was selected by the Tennessee Titans with the No. 18 overall pick in the first round of the NFL Draft. He is the first Arkansas receiver selected in the draft since Cobi Hamilton in 2013.

Additionally, Burks is the fourth Razorback to be drafted from his hometown of Warren, joining Greg Childs, Jarius Wright and Chris Gragg, and second-highest receiver taken in Arkansas program history.

“This is a guy you’re not just going to put outside and say, ‘Run me a 9 route. Run me a corner route. Run me a go.’ He is a playmaker,” ESPN analyst Booger McFarland said. “I want the ball in his hands, because once he gets the ball the second phase of his ability comes into play because you have to tackle him.

“This young man is a playmaker. Get the ball in his hands and make everyone else tackle him. To me, if you’re Tennessee, you got a younger version of A.J. Brown.”

More from WholeHogSports: Burks out to rep his grandfather's name

Ahead of the draft, Burks was considered the No. 24 available player, according to Muench, and No. 5 receiver. And at the NFL Combine, his time of 4.55 seconds in the 40-yard dash raised questions about his overall speed. Burks, though, shot down concerns following his Pro Day appearance.

“I feel like I did a terrific job,” said Burks, who did not attend a combine or camp as a high schooler. “I don’t care what nobody thinks. All I can say is go watch film and see if I’ve been caught with that 40 time. That’s all I can say.”

Burks, who on Dec. 8 opted out of the Outback Bowl to prepare for the draft, closed his Razorbacks career with 2,399 receiving yards (sixth most in program history) and 19 touchdown catches. In 2021, he totaled 1,104 yards and became the fourth Arkansas receiver to surpass the 1,000-yard mark in a season.

His 11 receiving touchdowns during the regular season tied Marcus Monk for second most in a season by a Razorback.

Burks finished with 100-plus yards receiving in half of Arkansas’ regular-season games and recorded 10 such games in his three seasons. Among his top performances was a 10-catch, 206-yard game at Missouri in 2020 and a season-high 179 yards and 2 touchdowns on 8 receptions against No. 2 Alabama on Nov. 20.

He caught multiple touchdown passes in a game four times.

More from WholeHogSports: A humble star, Burks lets his play do the talking

“Big, smooth and natural, Burks possesses the versatility to operate from wherever you want and get to wherever you need no matter the competition,” NFL.com analyst Lance Zierlein wrote. “He's a mismatch receiver combining size, strength and competitiveness similar to the Titans' A.J. Brown, but his speed testing at the NFL Scouting Combine did not meet expectations.

“Arkansas benefitted by putting the ball in his hands from a variety of alignments and there is no reason to believe NFL play-callers won't benefit from doing the same.”

Burks was a shining light amid program turmoil in 2019, landing on the All-SEC rookie team after becoming the fifth true freshman in program history to finish with 400-plus receiving yards. He was also a second-team All-SEC selection as a return specialist.

He totaled 226 kickoff return yards and 130 yards on punt returns, then the most by a Razorback in a season since Joe Adams in 2011. The following year, he broke out and truly emerged as of one of the elite skill players in the SEC.

Burks had team highs in catches (51), receiving yards (820) and touchdowns (7), averaging better than 91 yards per game against an SEC-only schedule. In 2021, Burks finished fourth in the SEC in receiving yards and yards per reception (16.7), and tied for second in touchdowns.