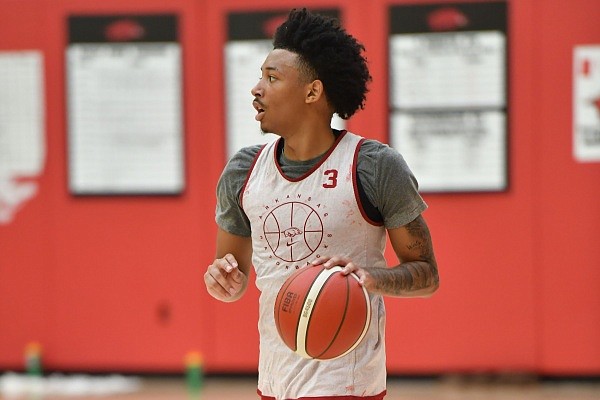 Arkansas guard Nick Smith Jr. drives with the ball Wednesday, July 27, 2022, during practice in the Eddie Sutton Men’s Basketball Practice Gym on the university campus in Fayetteville. Visit nwaonline.com/220728Daily/ for the photo gallery.

The Razorbacks used a 35-point first quarter and frenetic defensive pressure to cruise to a 108-59 victory over Valencia Seleccion in Valencia, Spain. Arkansas led 8-0 less than 1:30 into the game.

"I was happy with a lot of things," Razorbacks coach Eric Musselman said. "It also gives us a really good barometer, too, of things we have to work on. I thought we were really, really undisciplined defensively. We’ve got to become much more solid defensively.

Nick Smith unofficially led the Razorbacks with 17 points and provided the bulk of the team's perimeter scoring with three three-pointers. He also added six assists and four rebounds.

Smith was considered day-to-day late last week after injuring his left index finger in a practice, but he looked comfortable in Game 1.

"I feel like we played good today. I feel like we didn’t play very disciplined today on the defensive end, but it was the first game of the season."

Kamani Johnson, one of the team’s two returning scholarship players, pitched in 12 points. He came up just shy of a double-double with eight rebounds — five offensive — and had four assists.

Trevon Brazile, a sophomore transfer forward from Missouri, scored 12 points. He opened the second half with four quick scores, including two dunks and a layup after grabbing an offensive rebound.

"It's not really nothing to me because that's what I'm supposed to go out there and do," Brazile said. "That's pretty much it."

Wichita State transfer Ricky Council pitched in 11 points and made a number of highlight-reel caliber plays in the open floor. He finished with six rebounds and tied for the team lead with five defensive boards.

Black, Walsh and junior guard Davonte Davis each had four assists, and Walsh three steals. Dunning and Brazile each had one block, and six players tallied at least one steal.

"Not many people are going to talk about Barry Dunning," Musselman said. "I thought Barry played really well."

Outmatched athletically from the start, Valencia Seleccion struggled with ball handling and turnover issues, often finding it difficult to get the ball across halfcourt. It gave way to consistent scoring opportunities for Arkansas in transition.

The Razorbacks finished with 17 dunks.

Musselman in the first half was assessed a technical foul following a flurry of personal fouls on the Razorbacks on the defensive end.

Arkansas will play its second exhibition game in Barcelona, Spain, on Thursday against Barcelona Todo-Estrella at 1:30 p.m. It will be available for streaming on FloSports.