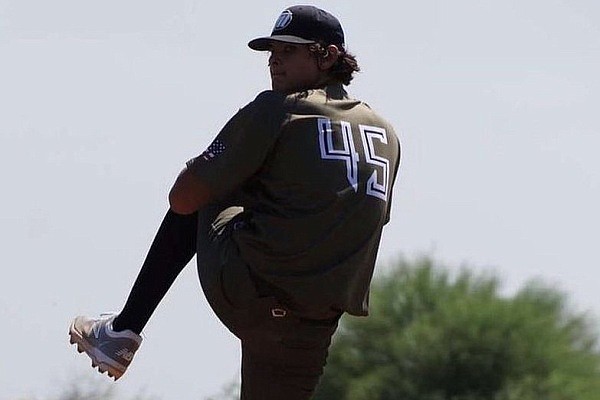 Class of 2024 right-handed pitcher Wade Mountz committed to Arkansas on Monday to become the Razorbacks' second pledge from Northern California in a few days.

Mountz, 6-7 and 230 pounds, of Bellarmine College Prep in San Jose played for Alpha Prime travel team this summer after missing his high school season due to injury.

Class of 2023 right-handed pitcher Gabe Gaeckle, who also plays for the Alpha Prime organization, committed to the Razorbacks two days before Mountz.

“He’s a big low slot, almost sidearm-slot right hander,” Farb said. “The ball moves a ton (with) 20 to 22 inches of horizontal movement. So for (Arkansas pitching coach Matt) Hobbs, who loves metric outliers, he is a metric outlier.”

Mountz, whose father pitched at Fresno State, went 25 innings and allowed 1 earned run for a 0.45 ERA for Alpha Prime. He struck out 35 and walked 10.

During Perfect Game competition, Mountz gave up 6 hits, had 22 strikeouts and walked 8 in 14 shutout innings.

Farb said Mountz is a super competitor with a big upside.

“He had a number of generous offers and just visited Arkansas this last weekend and fell in love with the place and ended up not taking visits he had planned to other schools,” Farb said. “He felt like that was home.”

Perfect Game rates Mountz the No. 269 overall prospect in the nation and the No. 46 prospect in California in his class. Farb expects his stock will improve in the next updated rankings.