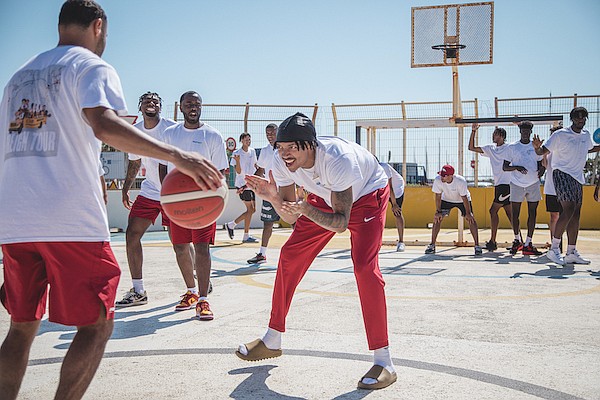 FAYETTEVILLE — The Arkansas Razorbacks men’s basketball team had plenty of fun on and off the court during its European tour that included four exhibition games.

The Razorbacks went 4-0 and University of Arkansas Coach Eric Musselman made sure his players got to experience what Valencia and Barcelona in Spain and Como in Italy had to offer away from basketball as well.

There were sight-seeing excursions in the cities, plenty of beach time and a boat tour around Lake Como.

“At my last university, we didn’t get freedom like this,” said Arkansas sophomore forward Trevon Brazile, a transfer from Missouri. “So this is definitely something new, especially overseas.

“Being able to go to the beach and play the same day, that just doesn’t happen. So it was just a great experience all around.”

All of Arkansas’ games were at night, but Musselman didn’t have the players resting all day at their hotel as he was told is the case with some American college teams that go on foreign tours.

Musselman conducted practices at outdoor courts — even on the beach — and the team made a brief visit to Switzerland before one of the games in Como.

“We’re with a tour company and they said that they’d never seen a team have so much freedom during the trip,” Musselman said. “They talked about the day of a game, us still doing events and how we maximized the education piece of this trip.

“Just hearing how teams aren’t allowed out of their hotel the day of the game. … Our guys had a lot of freedom.

“I thought they conducted themselves really well. And then they were able to turn on the switch once we were able to compete and play a game. So a lot of positives.”

The Razorbacks used four different starting combinations in their victories over Valencia Seleccion 107-59, Catalan Elite 98-86, Orange I Basket Bassano 75-54 and the Bakken Bears 70-59. All 13 scholarship players got at least one start.

“A lot of guys got opportunities,” Musselman said. “We got to see some things, some different combinations.”

The 6-10 Brazile averaged a team-high 15.8 points and 5.0 rebounds per game on the tour and hit 29 of 34 shots with several highlight dunks.

Nick Smith, a 6-5 freshman guard, averaged 14.8 points, 3.0 assists and 2.0 steals. He averaged 18.0 points in the first three games before being limited to 12 minutes against Bakken because of a sprained knee.

Kamani Johnson, a 6-7 senior forward was among Arkansas’ best players on the tour and most aggressive rebounder. He averaged 9.3 points and 9.3 rebounds and hit 13 of 19 shots and 11 of 13 free throws.

Smith, Black and Walsh were all McDonald’s All-Americans, so their spots in the rotation were expected. Dunning’s performance was a bit of a pleasant surprise as he averaged 7.5 points and 3.0 rebounds and hit 13 of 20 shots.

“I feel like everybody found their role,” Brazile said. “The first game, you can’t really tell because we’re not playing against great competition. But this last game and maybe the game before, everybody went out and did what they had to do.”

Brazile and Council are among 11 newcomers for the Razorbacks. The only scholarship returners are Davis and Johnson.

“Coach knows it. We know it, and we’ve just got to work on it so we can be prepared for the season.”

Last season Arkansas advanced to the NCAA Tournament Elite Eight for the second consecutive year despite shooting 30.4% on three-pointers. In Europe, Smith was the Razorbacks’ top three-point shooter on the tour, hitting 9 of 23.

“Our three-point shooting has got to improve,” Musselman said. “I didn’t think it could match last year, but it kind of is.”

Smith and Davis, who will share point guard duties with Black, each had 12 turnovers on the tour.

“So in a short amount of time — meaning September and October — we have some guys that really have to work on taking care of the ball and then we’ve got to improve perimeter shooting,” Musselman said.

Musselman said some of the turnover issues could be attributed to the Razorbacks getting used to playing together.

“That’s what happens when you have a lot of new guys,” he said. “You’re going to turn the ball over a lot.

“Obviously, our goal is nine, so that has to drastically, drastically improve. Now we are able to go back and work on it.”

The Razorbacks, who had 10 full-scale practices leading into their tour in accordance with NCAA rules, will be off until fall semester classes begin Monday. Then they’ll resume working with the coaches four hours per week — as they did earlier in the summer — until preseason practices begin in mid-October.

“They’re going to have to be great time managers over the next eight weeks,” Musselman said of the players balancing academics and limited work time with the coaching staff. “So their individual productivity that they do on their own time is going to be of the utmost importance.”

The team flew home Tuesday after being in Europe for nine days.

“We got to see some beautiful places, places that some people probably won’t ever see again in their life,” Council said. “We just had to take it all in.

“But if I’m being honest, I’m ready to get back to the States.”