Lineman making another visit to UA 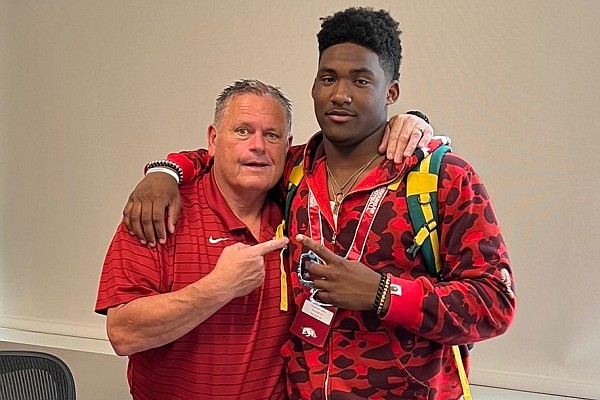 He’s expected to make his fifth visit to the University of Arkansas for the season-opener against Cincinnati on Sept. 3 with several buddies in tow.

“I get to share my blessing with everybody around me. I bring guys with me to see stuff that they haven’t seen before that they might not be able to experience,” Collins said. “When Arkansas plays Cincinnati week one, we’ll probably going to need about 20 tickets.”

One of the reasons for his desire to visit the Razorbacks again is defensive line coach Deke Adams. Collins, who calls Adams a family man, has also been able to meet Adams’ wife Alexis and son Jordyn, who was a first-round pick by the Los Angeles Angels in the 2018 Major League Baseball Draft.

“I love Coach Adams,” Collins said. “We don’t just talk about football. He tries to come off more as a mentor. Life skills. Sometimes I’m on the phone while he’s cooking. I’ve met his wife, I’ve met his son. … It’s more about a family perspective. It’s not about football with him.”

Collins said he is also encouraged how the Arkansas program has progressed under Coach Sam Pittman.

“I love what they’re doing up there on the Hill,” Collins said. “They’re actually building something. Not saying it’s going to be complete in a year or two, but they’re most definitely putting stuff together.”

On3.com rates Collins a 3-star recruit, the No. 23 defensive lineman and No. 235 overall prospect in the nation in the 2024 class.

“He has all the intangibles you’re looking for in a defensive player,” Lee said. “Super smart and more than anything I’ve just seen him be a great team leader.”

Collins, who has visited Ole Miss three times, said he is focused on the people at schools when making a decision.

“How the boss treats the janitor,” Collins said. “How the head coach treats the recruiting staff. Not just everything just for show when I’m around. As a recruit, I want to see how everything is from a day-to-day basis.”

With plenty of time until he’s able to sign with a school in December 2023, Collins said he’s in no rush to pick his future college.

“My decision won’t come until later in my recruitment,” Collins said. “I won’t be one of those early commitments I can tell you that for sure because I really want to sit down and look at the pros and cons of everything. It’s going to be the place I spend my next three years. I’m not too much of a bandwagon-type person. If I’m with you, I’m stuck with you. There’s no chance for portal or that, so wherever I decide, that’s where I’ll be the next three years of my life.”

An inside joke between Collins and some friends had Twitter buzzing late Sunday night. He posted he would be committing on Aug. 32 at 6 a.m. While most realized there’s not a 32nd day in the month, some didn’t realize the joke and that led Collins to waking up the next morning to numerous missed calls inquiring about an upcoming decision.

“I had to inform everybody to go back and look at it the date,” Collins said. “There’s no such thing as Aug. 32nd. It was all fun and jokes. Everybody loved it. It got a lot more attention than I expected.”

An admitted momma’s boy, there’s one thing Collins won’t ever joke about and that’s his love for his mother.

“I love my momma. I love that she’s sacrificed things for me,” Collins said. “She’s never scared to take that extra step and step out of the comfort zone for me and her kids. Even when the times weren’t the best, she always made a way and for that, once I make it to the next level, I always have to give back to my people.”